0 shares
What would the holidays be without a walk in the city.  The place to be right about now, is walking down festive Fifth Avenue. That is where all the fancy stores are located, they are decked out for the holidays, and they all lead to the centerpiece of it all…Rockefeller Center with the big tree.

I went on such a walk with my family and wanted to share the sights.  For me it was not so much the tree but all the eye candy along the way.  Let’s be on our way.

We started off walking across Park Avenue which is a jewel in itself although not full of shops but nevertheless it has its own distinctive brand of elegance.
​ 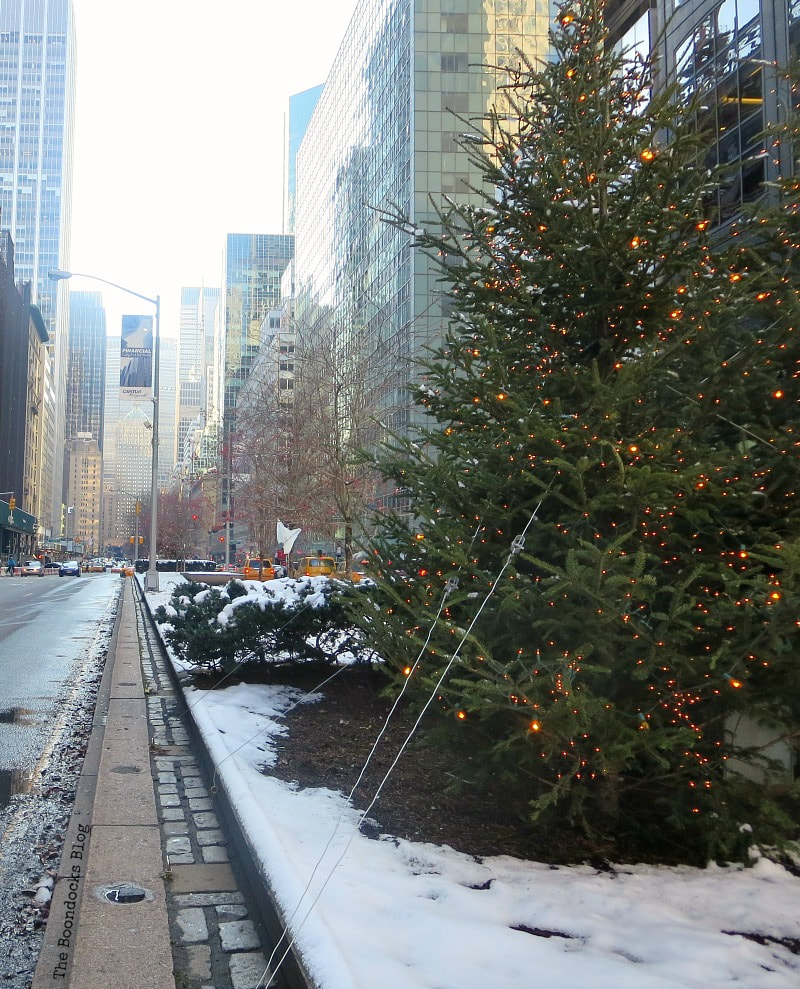 Two blocks West and we reach our destination which is 57th Street and Fifth Avenue.  For those of you who have never been to Manhattan, the island is very simple to navigate with street numbers running up the length of most of the island.

Fifth Avenue is the center and it is here that the island is separated into east and west.

It is one of the most expensive and elegant streets in the world. The first store we see is Bergdorf Goodman, a high end department store.
​ 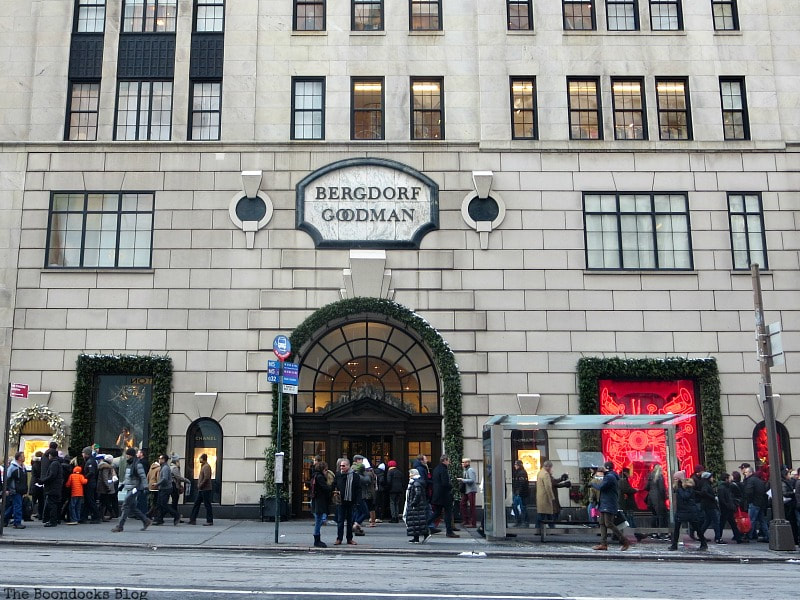 Their windows always impress and this year is no exception with the celebration of  New York’s cultural centers.   Below is a window for the Museum of Natural History.
​ 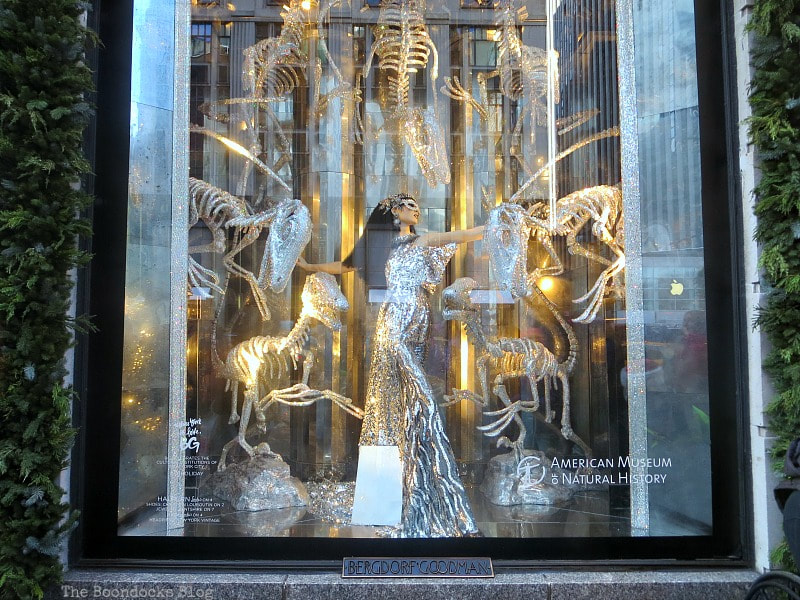 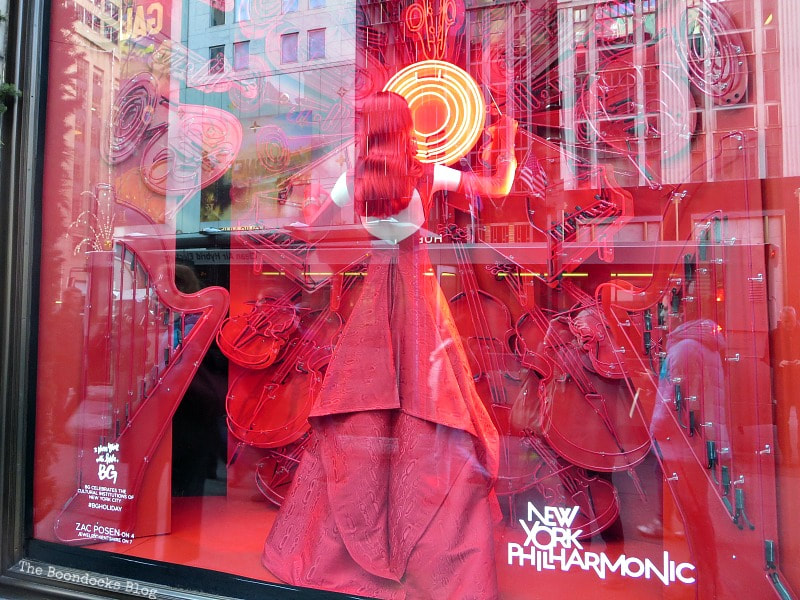 On the intersection of 57th Street and Fifth Avenue is a star suspended above the center of the street.  You can see it on the left hand side of the photo.  But it really shines in the evening.  At one corner we have Tiffany and Co. with the Trump Tower to the right.
​ 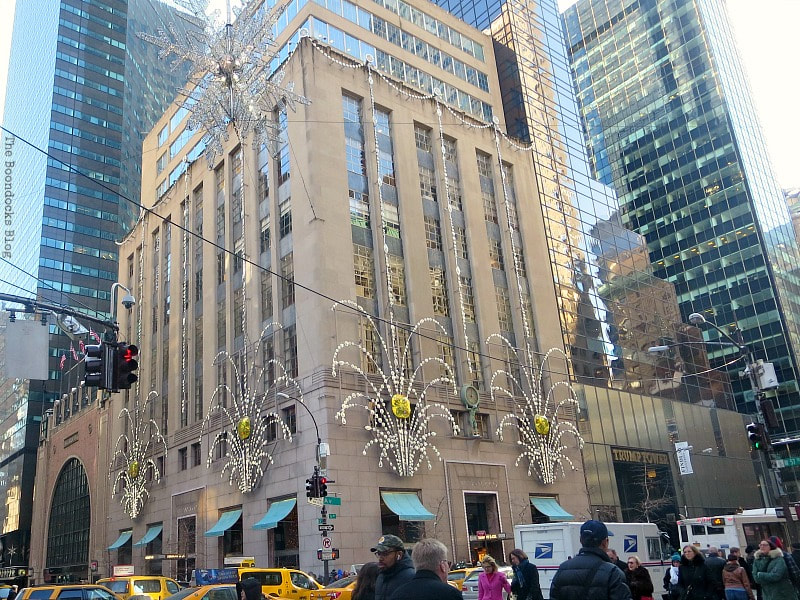 As we continue down to 55th Street we find the Harry Winston Store for fine jewelry.  The building is very impressive and it houses the St. Regis Hotel.  The 18-story French Beaux-Arts style hotel was built in 1904 by John Astor who also owned the Waldorf-Astoria. 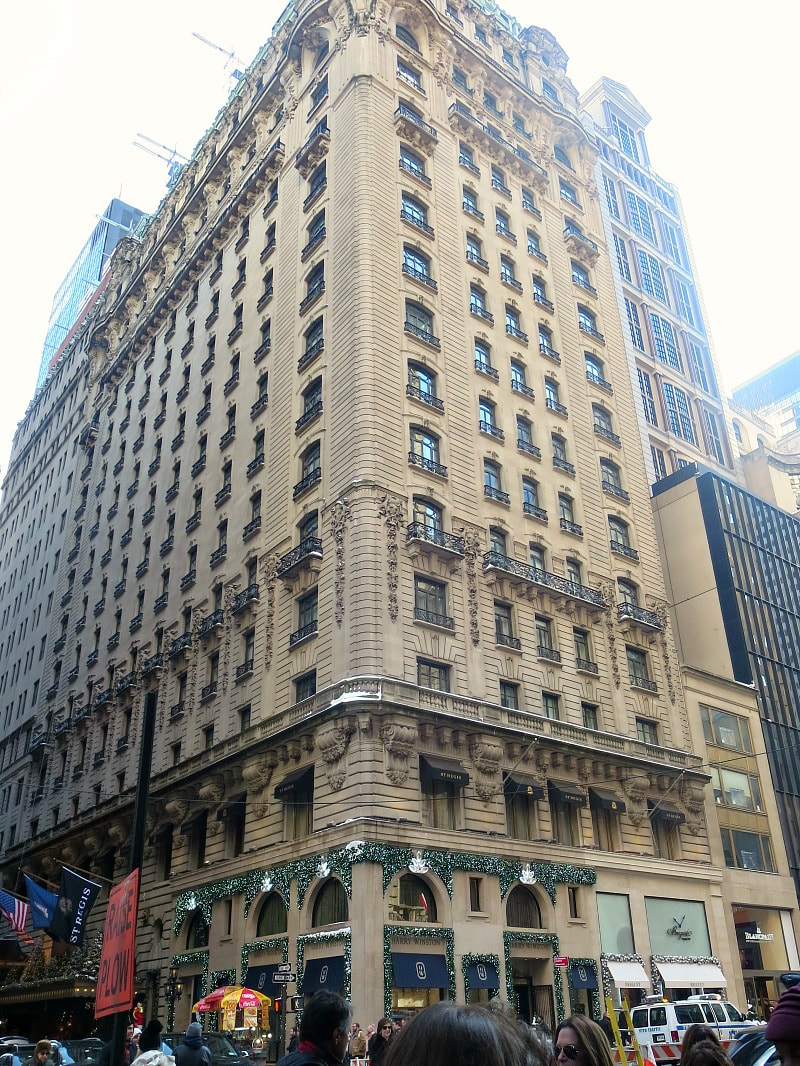 Across the street is The Peninsula Hotel all decked out.  The hotel was built in 1905 and quickly went bankrupt partly because it could not get a liquor license. It is also considered to be one of the most luxurious hotels in the world.
​ 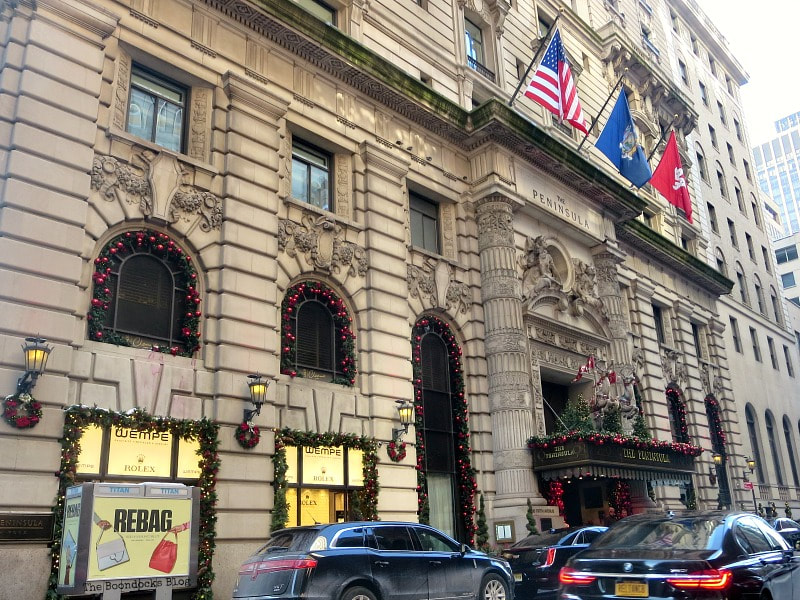 Both these hotels had trouble because at the time of their inception they were in close proximity to the Presbyterian Church.  The Victorian Gothic styled church served in part as a barrier to the hotels in obtaining a liquor license.

That is odd since the church was built prior to the hotels, in 1875. The location was chosen with the belief that Central Park would act as a natural barrier to discourage the expansion of business and factories in their direction.  The area was also full of mansions such as the Vanderbilt mansions which dotted Fifth Avenue at the time.  Little did they know what was to come.

It is also the largest Presbyterian sanctuary in Manhattan and seats 2,000.
​ 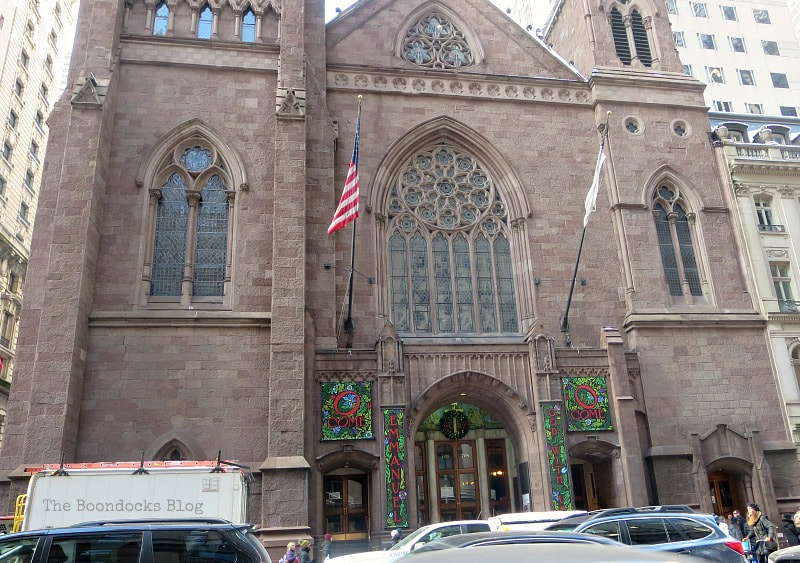 A little past 54th Street we encounter this shiny flagship store for Tommy Hilfiger. Those are a lot of globes. 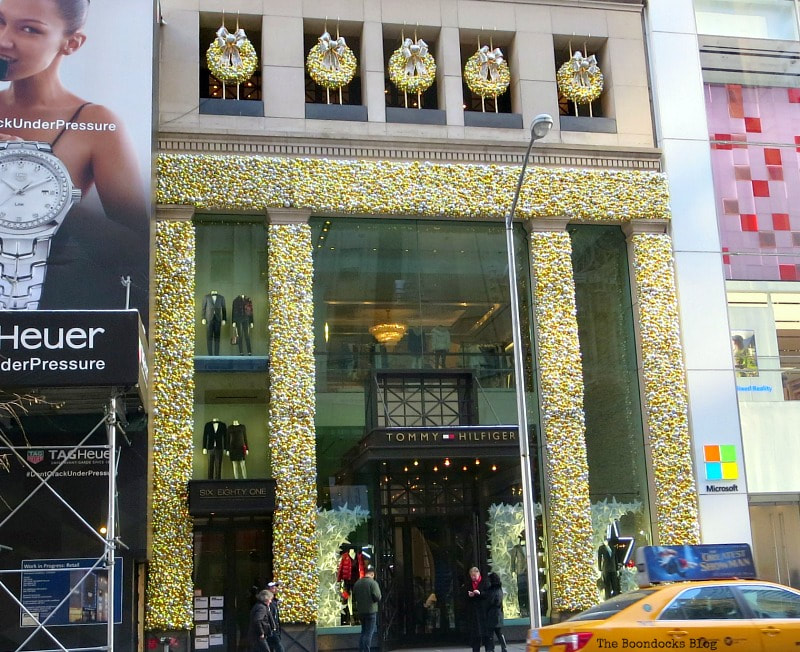 Cartier is all wrapped up one block down! It is housed in a 1905 Italian Renaissance-style building.  It was acquired from a wealthy couple who were the original owners.  The wife wanted a pearl necklace from Cartier worth 1 million at the time. Instead of purchasing it, they traded their house for it in 1917. The mansion was recently renovated and now has four floors of retail space.

​You can read more about the Fifth Avenue Mansions here. 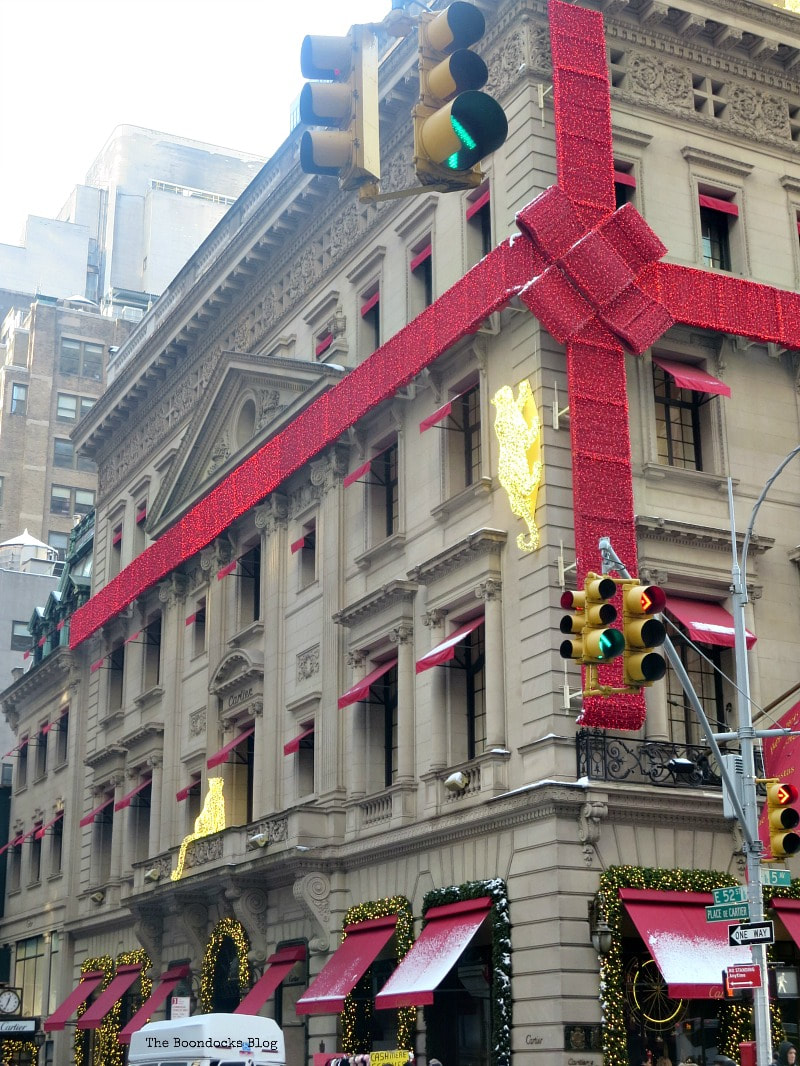 A block further down is St. Patrick’s Cathedral in the Neo-Roman Gothic style.  It is a landmark of New York and one of the most recognized symbols of Catholicism in the US.  The Cathedral was dedicated in 1879 and it is the largest Gothic Roman Catholic Cathedral in the United States.
​ 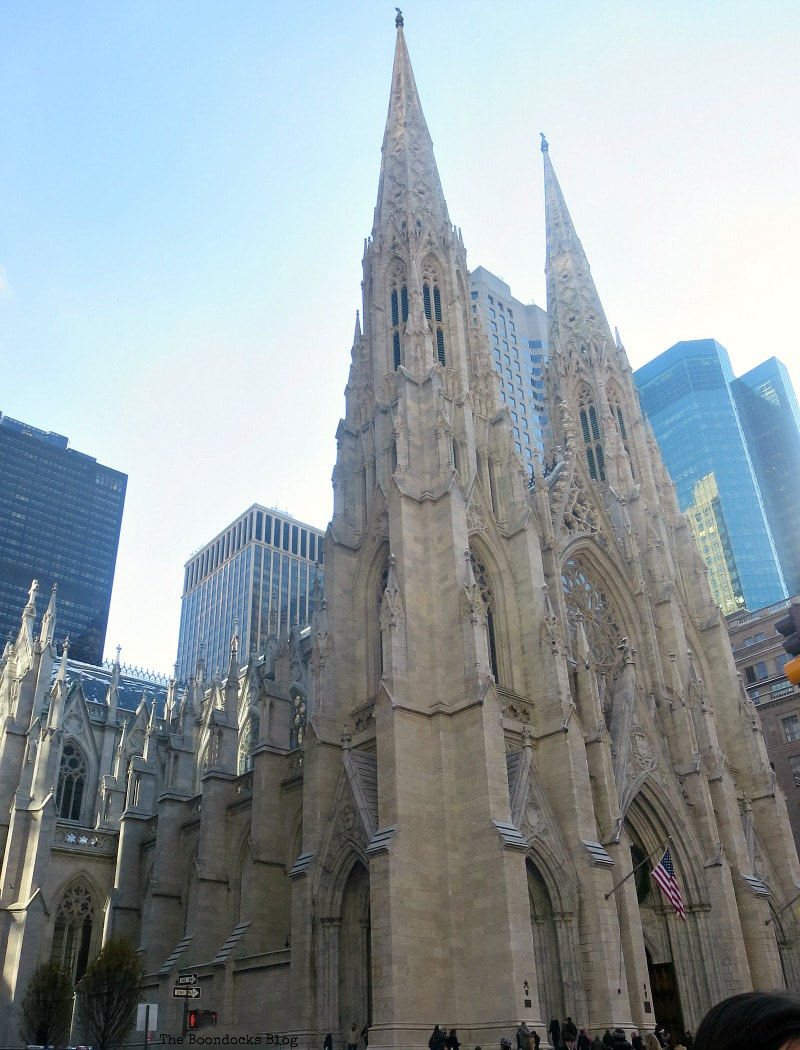 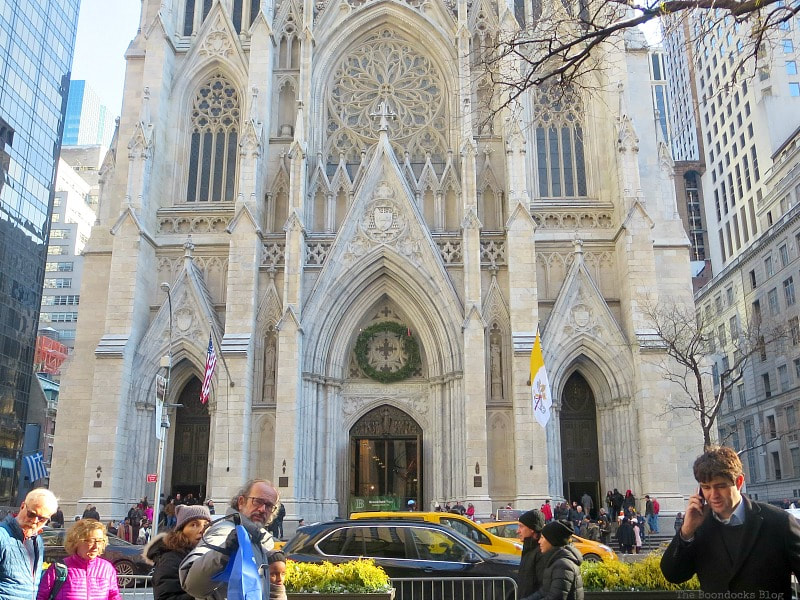 Right below the Cathedral is the one and only Saks Fifth Avenue department store.  There were so many people at the windows, barriers were placed to keep order.
​ 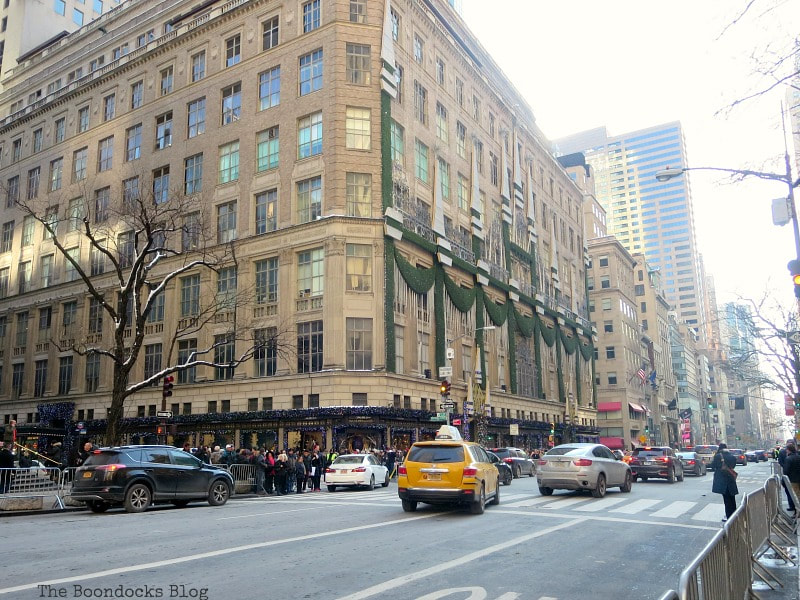 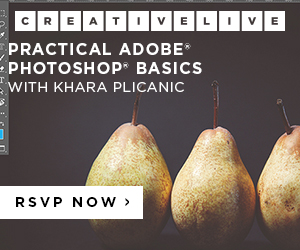 ​Looking up at the facade of the building.
​ 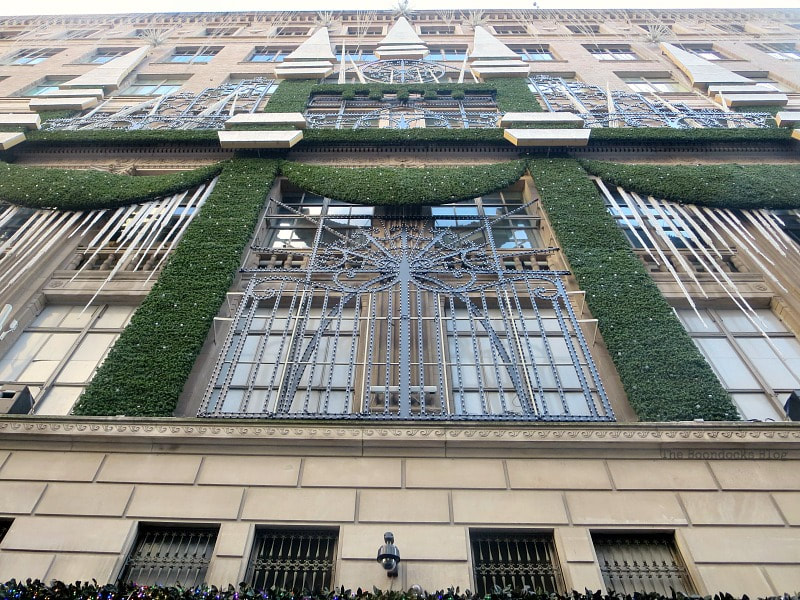 The windows at Saks were all inspired by Snow White.
​ 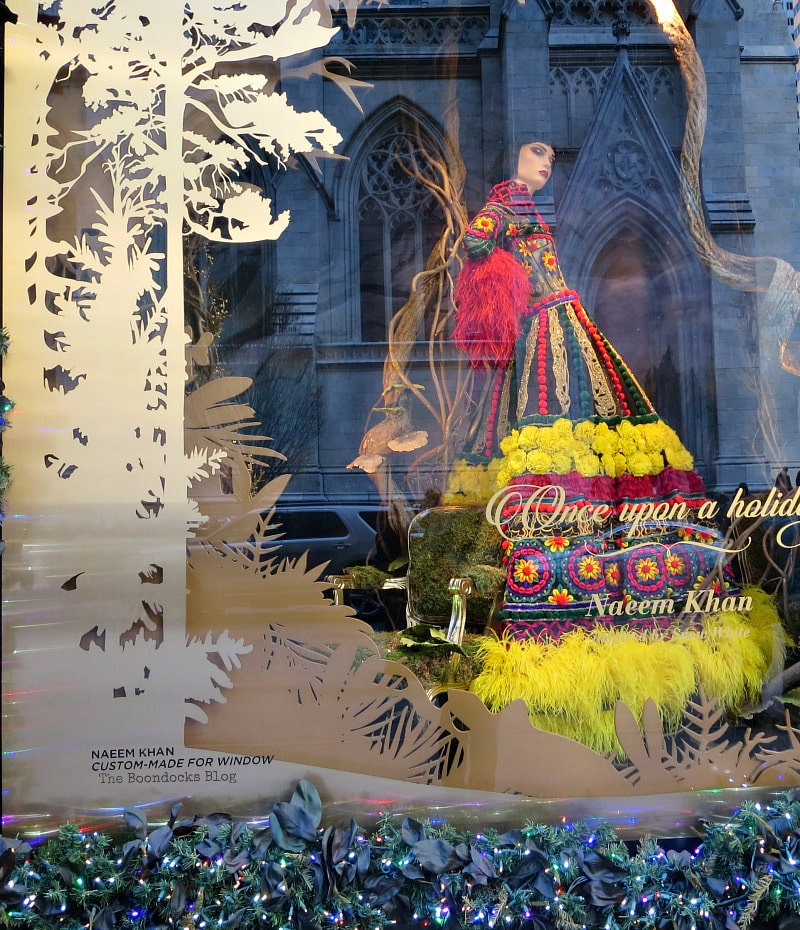 This year Saks is working with Disney to bring us lots of pretty windows and cute dwarfs.
​ 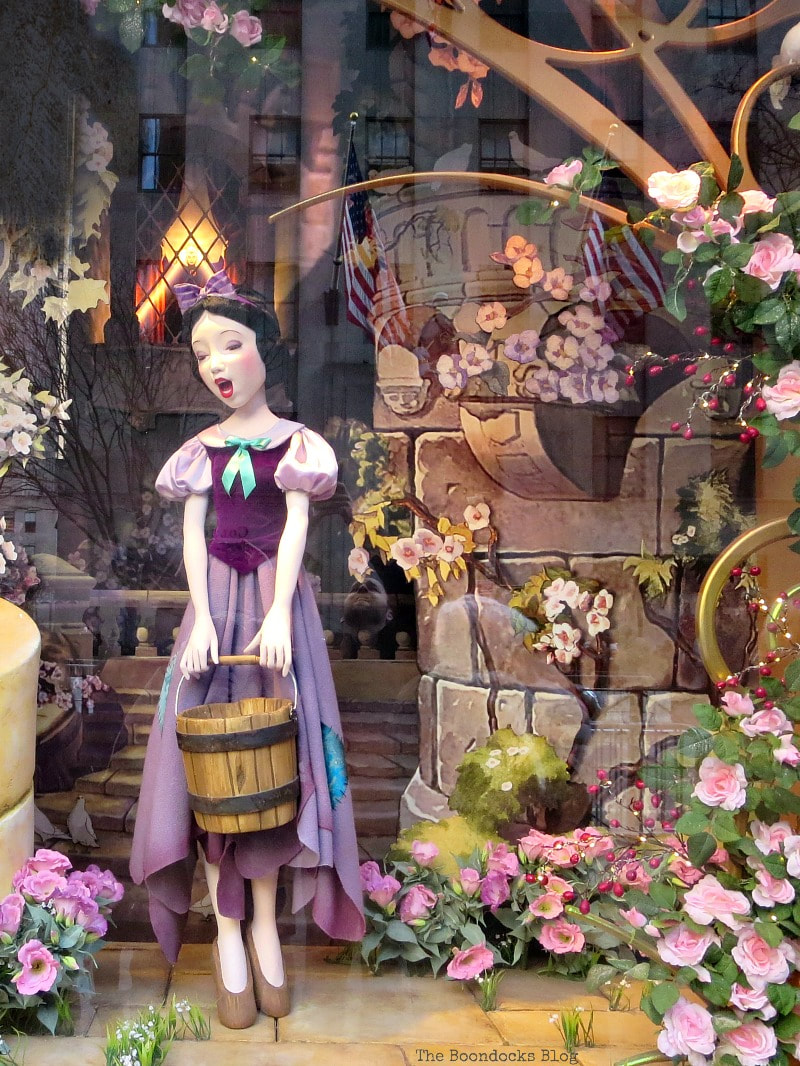 ​Disclosure: This post contains affiliate links .  If you purchase any of these products through the links, I receive a small commission, that way I can continue to provide you with lovely content.  There is no extra charge to you for purchasing through my affiliate links.
​ 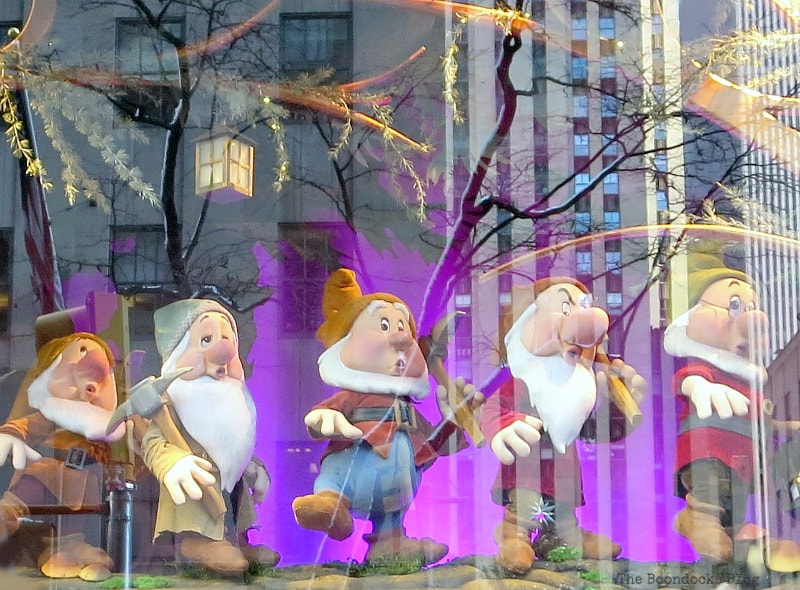 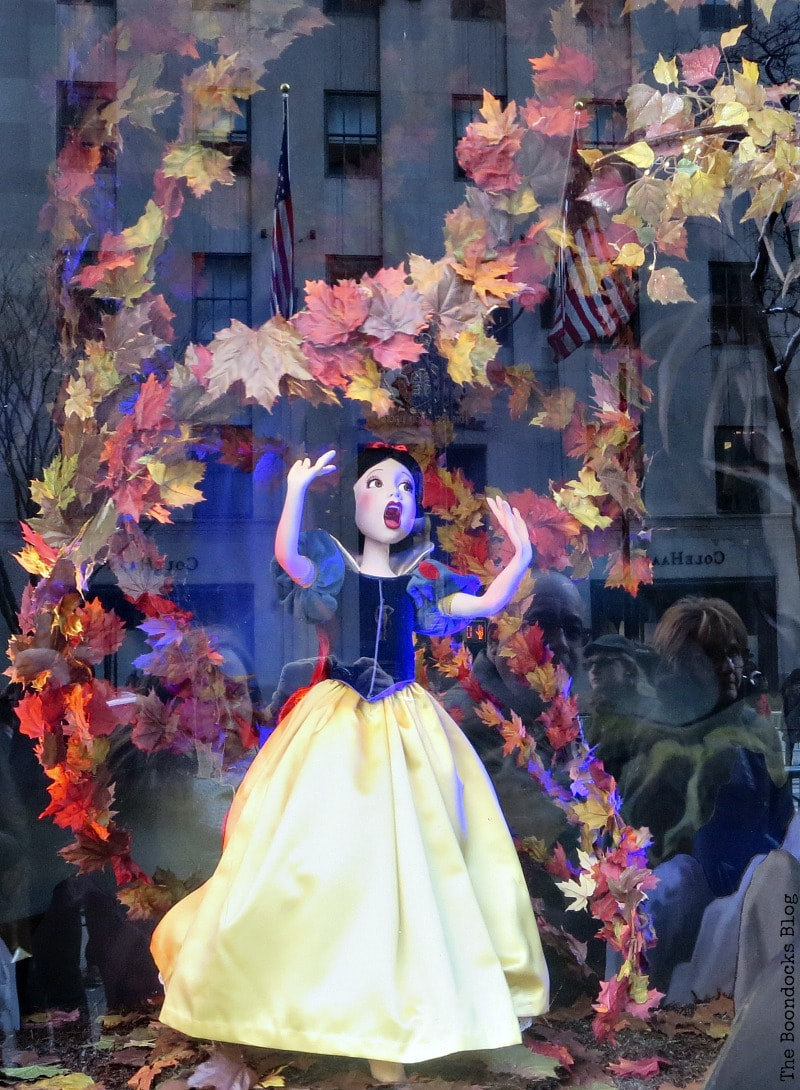 Across the street is from the Cathedral is Atlas at Rockefeller Center. It was installed at the courtyard of the Center in 1937.  The entire statue is 45 feet in height (14 meters) while Atlas himself is 15 feet tall 4.6 meters).
​ 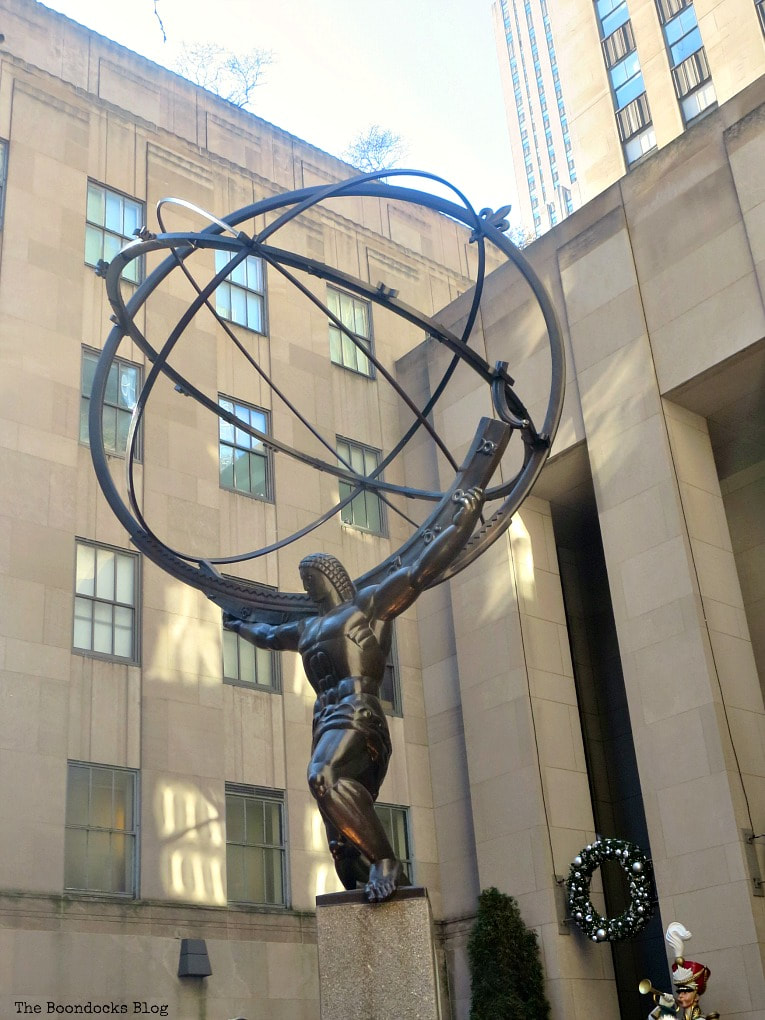 All in all the Rockefeller Center complex houses 19 commercial buildings, the first phase which is in the Art Deco Style and the second the International Style of Architecture, a total of 22 acres. It is a New York Landmark and a National Historic Landmark.
​ 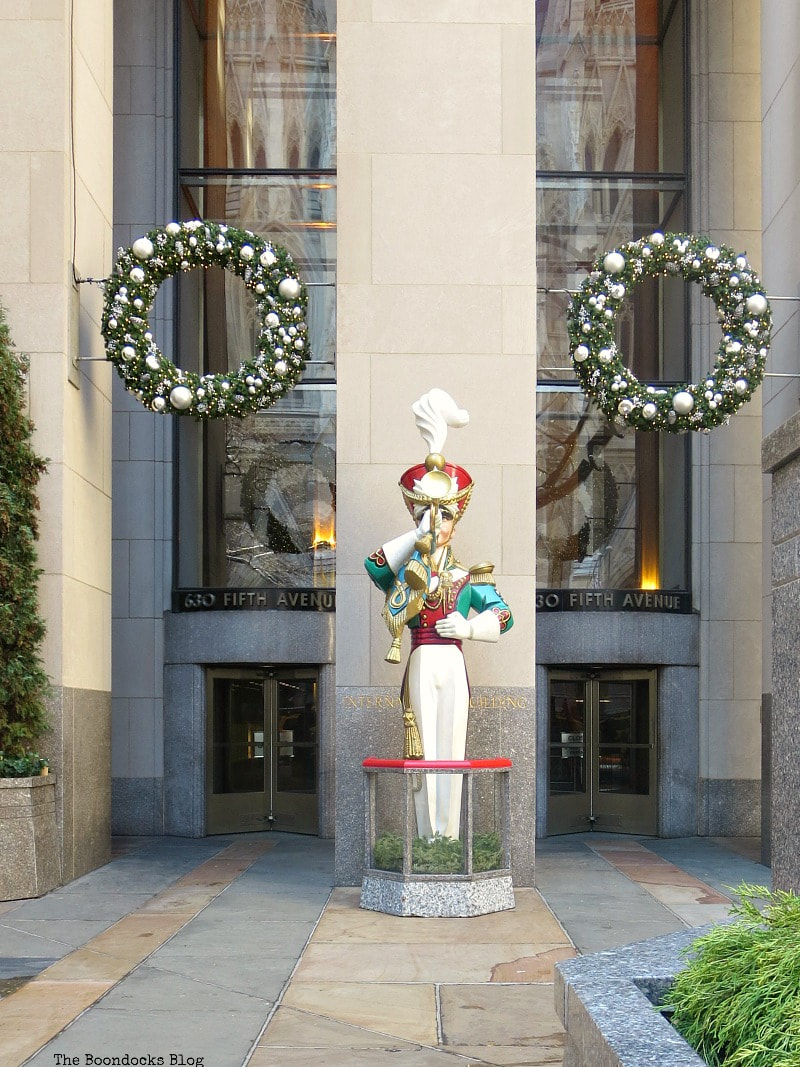 And finally we reach the heart of Rockefeller Center, where the tree is located.  There were so many people there that day, it was the weekend, that it was hard to see much.

Rockefeller Center actually originated as a space to house the old Metropolitan Opera House. Because of the expense involved the Opera House received an endowment from John Rockefeller. Construction was to start in 1929 but due to the stock market crash the Opera House was unable to move to this location.  This freed up the space and Rockefeller proceeded to turn it into a Mass Media Entertainment Complex.  Tenants included RCA, NBC and RKO.  It officially opened in 1933.

A fun fact.  The land on which the center is built was originally owned by Columbia University and it was sold to the Rockefeller Group in 1985.
​ 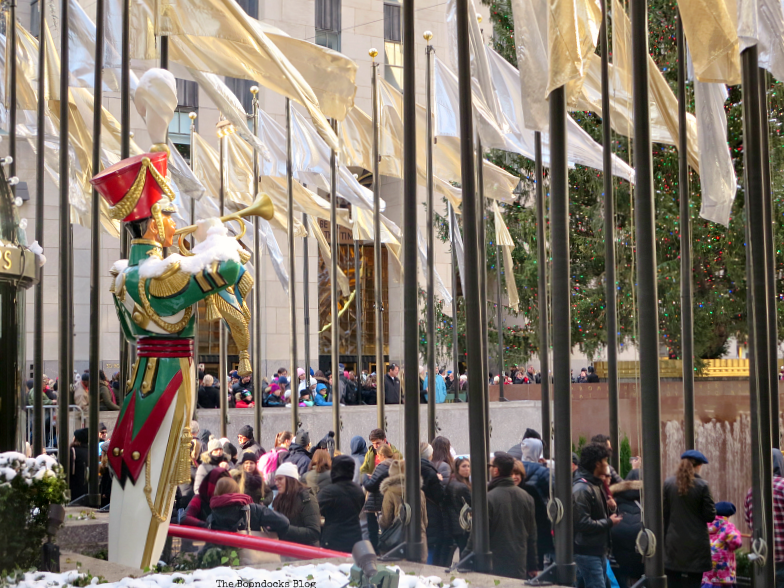 It is also the home of the Radio City Music Hall and the Rockettes. And the famous Rink which is an outdoor lower plaza the summertime.   We actually went in the side entrance and managed to get a glimpse of the skaters.

The original buildings all have a limestone facade and are landmarks.
​ 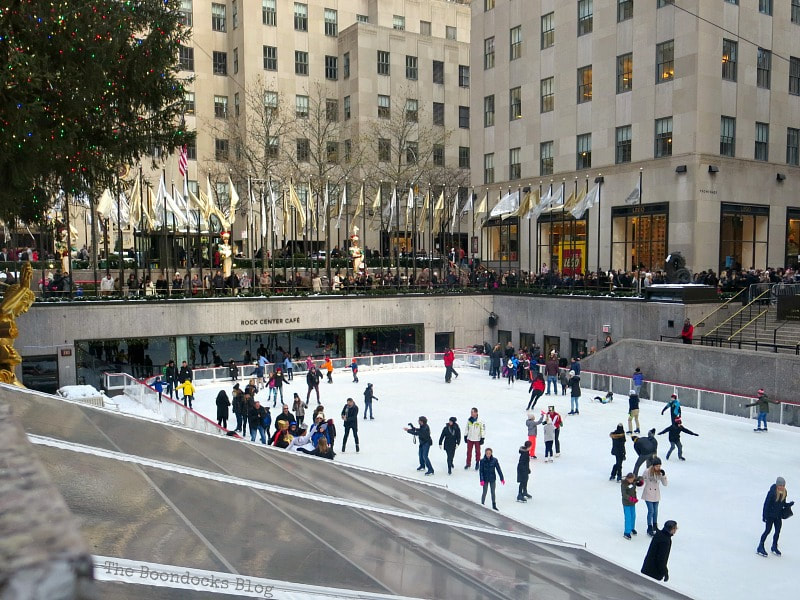 The tradition of the lighting of the tree, which in located in front of 30 Rock began in 1933 and has lasted till today, with over 125 million people visiting the tree each year, including us.  We had to squish together because we got photo bombed.   This year’s tree is 75 feet tall. 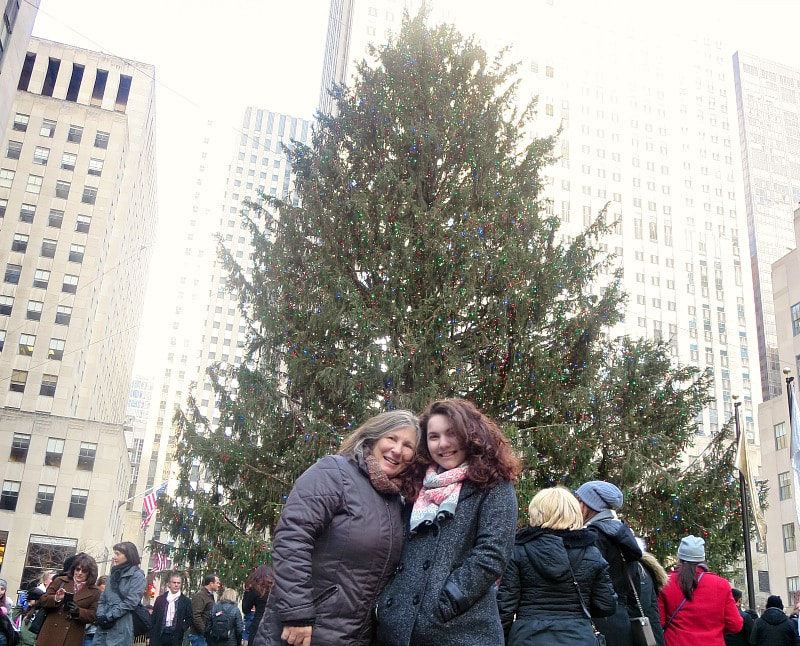 What makes it remarkable is the amount of art present in all of its buildings, a melding of art and commerce. Below is the facade of 30 Rock and that is Wisdom and  a detail of the biblical verse of Isaiah 33:6.

You can read all about the art here.
​ 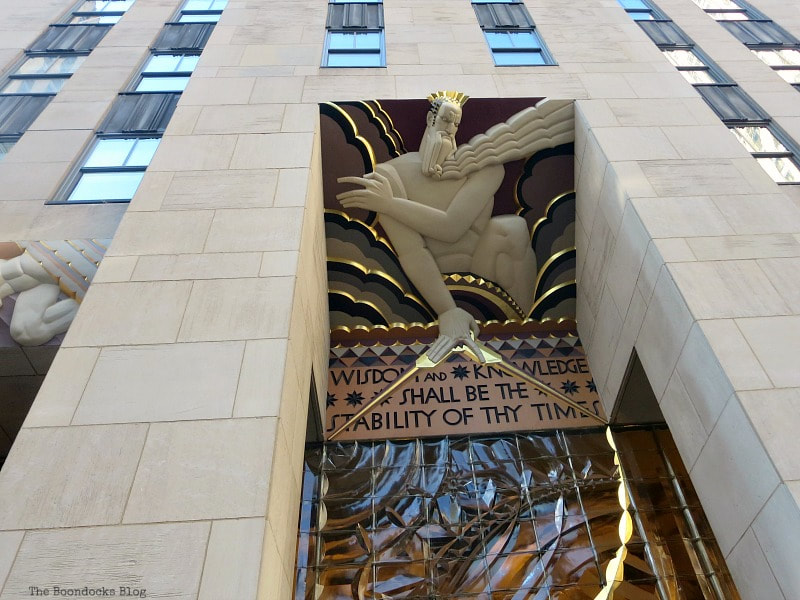 On our way back up we spotted this window laden with sweets, and well, you can guess the rest.
​ 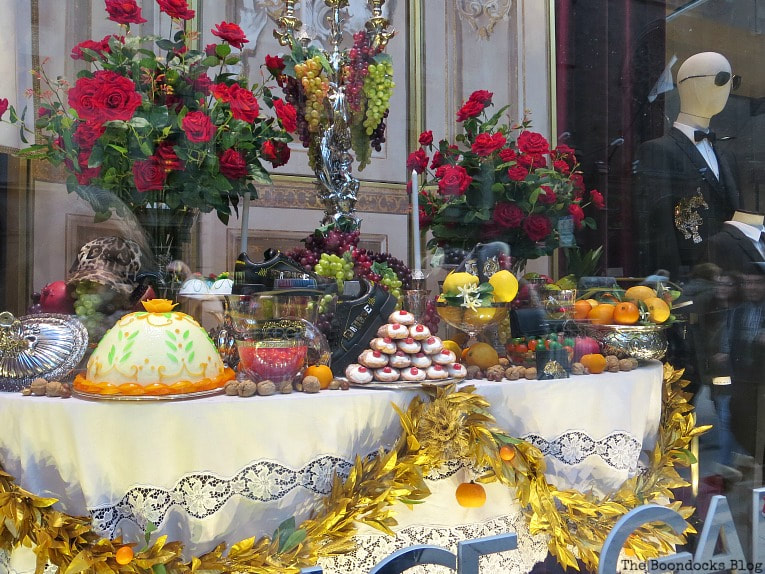 And that was my exhaustive although certainly not thorough tour,  I have to confess I walk around like a tourist but when I get home I have to research all these buildings.  I find them absolutely fascinating. The fact is they are so old but still standing in solid shape. It would take many more trips for me to fully cover everything.
​
So what started as a quick trip to see the Christmas windows turned into a history lesson. I want to know if you find this boring or are you interested in all these stories of days gone by?

I also want to wish you all Merry Christmas and Happy Holidays!

If you’d like to see more photography go to my photo gallery here.  You can also subscribe to my photos below. I now have a separate subscription for photos so if you haven’t subscribed you may miss out.
​ 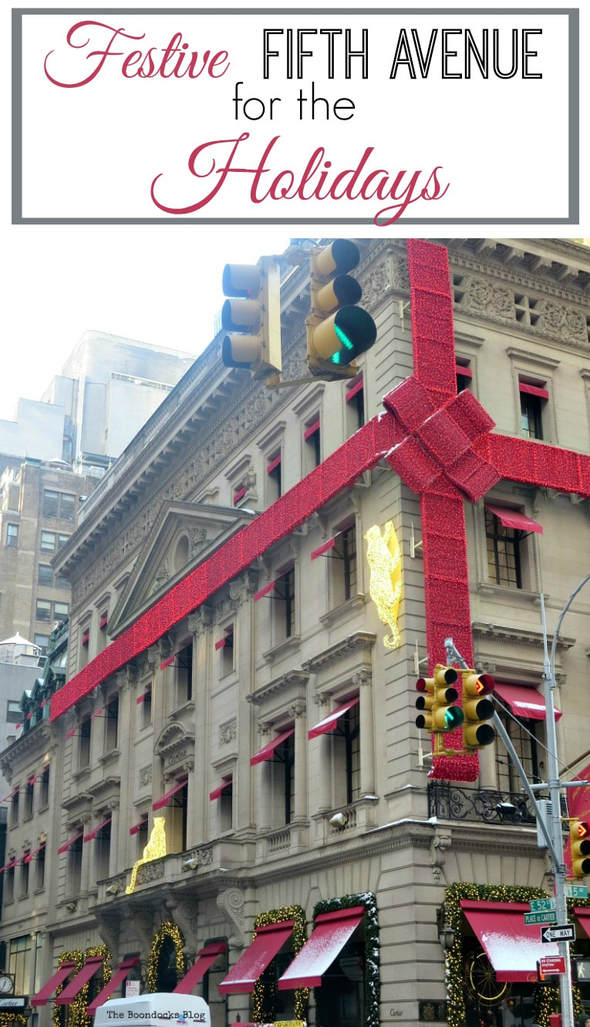 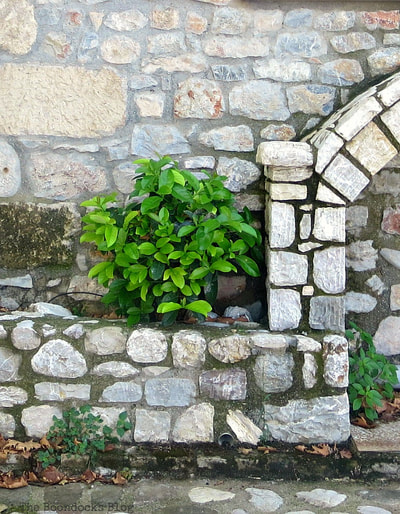 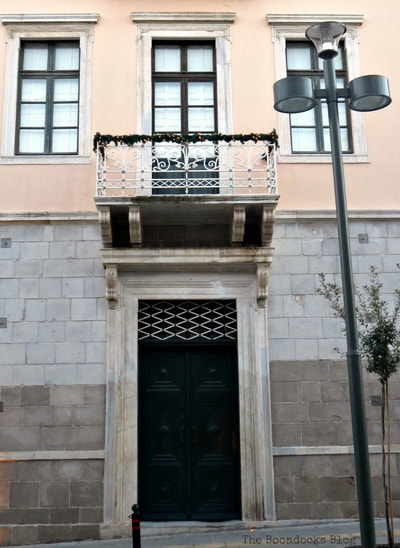 Mary, I found the tour very interesting. That's so crazy that the couple traded their house for a pearl necklace, like what the hey?!! I guess that lady wanted the necklace pretty bad, lol. I assume they had another home and the house they traded was one of many. I'm sure walking around enjoying the sites was fun and you and your daughter look so beautiful in front of the tree, what fun memories!

Love the pictures and guided tour Mary. Lucky you to see such glorious sights. Wishing you a Happy Holiday and Many Blessings in the New Year. Nancy A

I am lucky indeed Nancy, Happy Holidays to you too!

A fun walk Mary - I love seeing all the Christmas decor. Thanks for sharing.

Thank you for visiting. It was a fun tour.

Gorgeous views from your city. My small town is great, but nothing like this! Thanks for linking up today and have a great weekend!

Thanks Michelle, we had so much fun walking down the street, there were so many people.

Doreen I am having so much fun researching all these areas. I never knew there was so much history behind NY considering it is not old at all... compared to Greece.