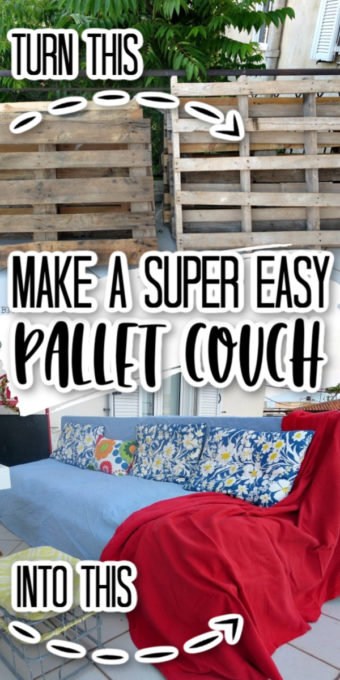 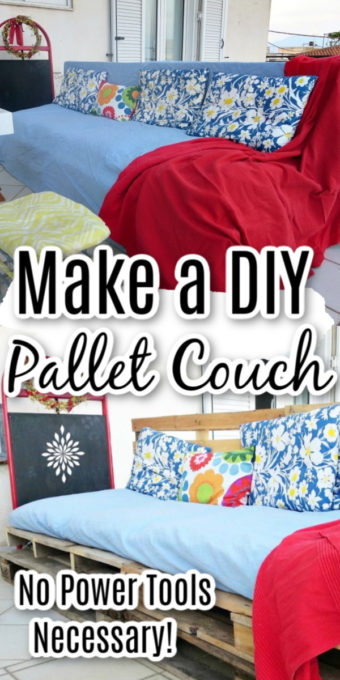 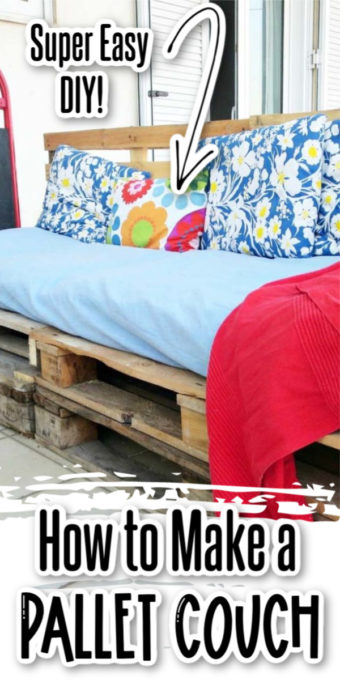 Have you ever driven by a used pile of pallets and thought, “What could I make with that?”. Well, I’m going to show you the easiest possible way to make a DIY pallet couch with them – no power tools needed!

The other day I was wandering around the balcony of the new apartment that we will be downsizing to – which is actually one floor below the one we currently live in. It felt so huge and empty. We just had a few uncomfortable chairs out there. I really wanted to add some kind of furniture aside from  the colorful fence with the dollar store flowers that I was planning to add.

I spotted a bunch of pallets hidden away in a corner of the house and was itching to do something with them.  But the hubs was at the farm.  Did that stop me?  Of course not, with no tools at all I quickly made a super easy DIY pallet couch! 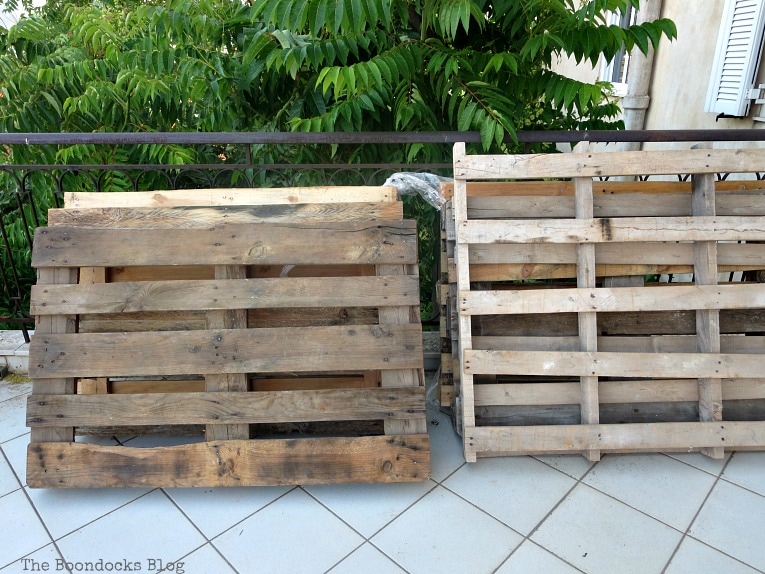 I had used pallets before. I had even made a drunken table with one, but here I was looking to quickly make something because my poor bones were tired after working on other projects all day.  I just wanted something super easy that would allow me to enjoy this great big ol’ balcony!

What I used for this Project:

How to Make a DIY Pallet Couch without Tools:

I placed two pallets down, one on top of the other.  And another two next to those. Then I took the remaining two pallets and placed them behind the two sets.  Like the backrest of a couch. In my case one of the pallets was a bit wider than the rest.
​ 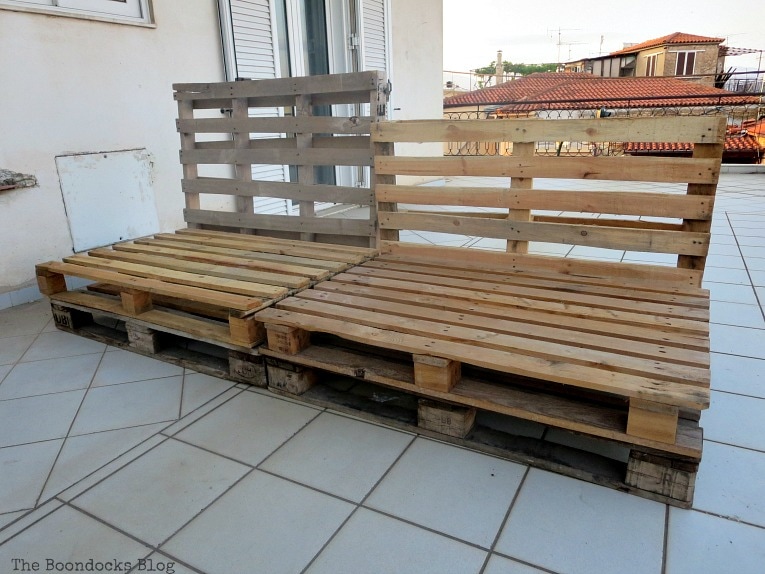 I used a saw to cut the excess off.  Of course if you have pallets that are all the same size you won’t need to do this step.
​ 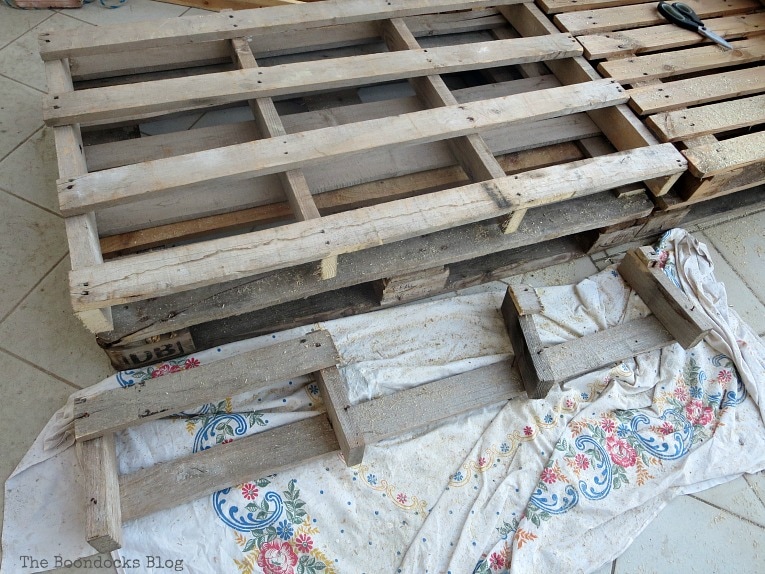 I ended up switching them around and placing the one that I cut down on the bottom.
​ 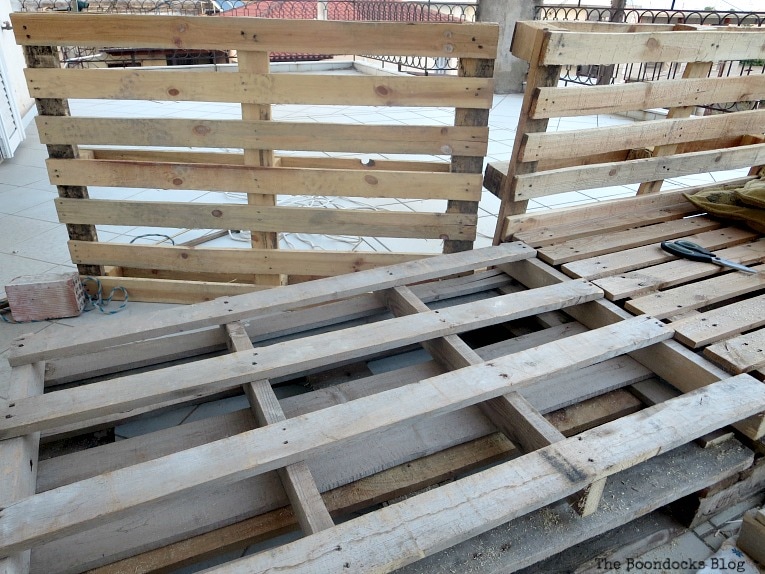 Using the rope, I tied the back of the pallet that was standing up to the top pallet which was laying down.
​ 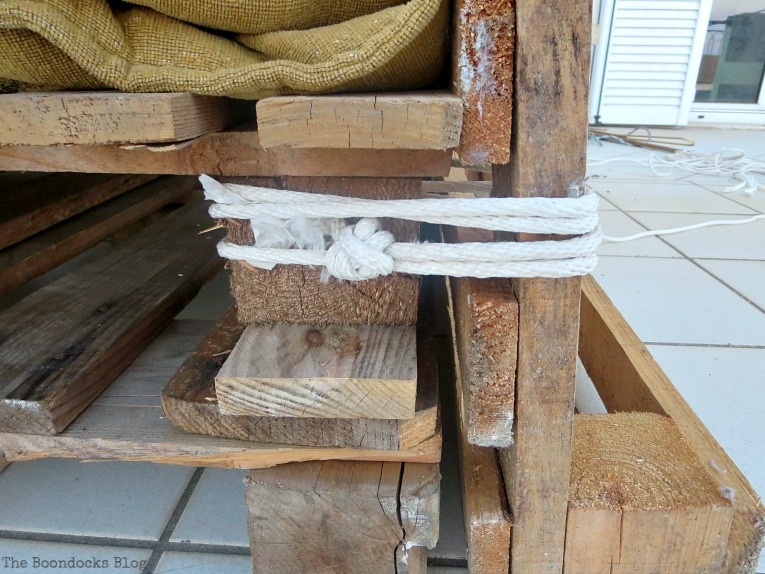 Now I didn’t want to have to cut my rope, so I just pulled it through and moved over to the middle section and passed the rope through the pallets again tying them together.
​

I did the same thing at all points where the standing pallets had a vertical piece that could be attached to the other pallets.
​ 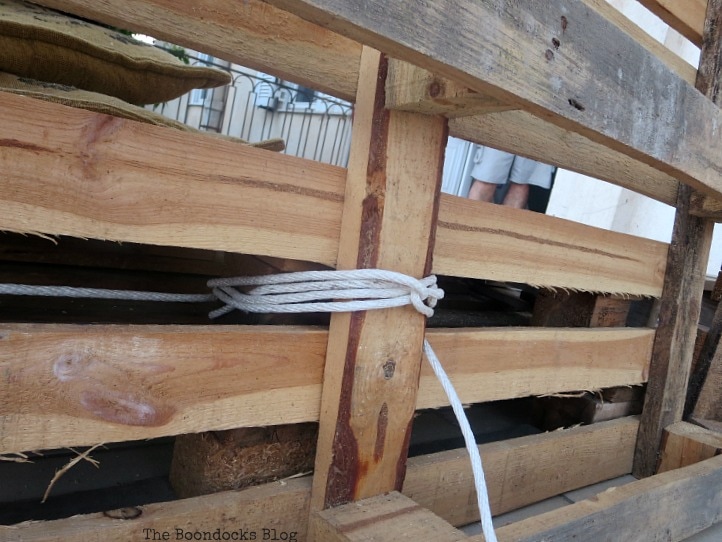 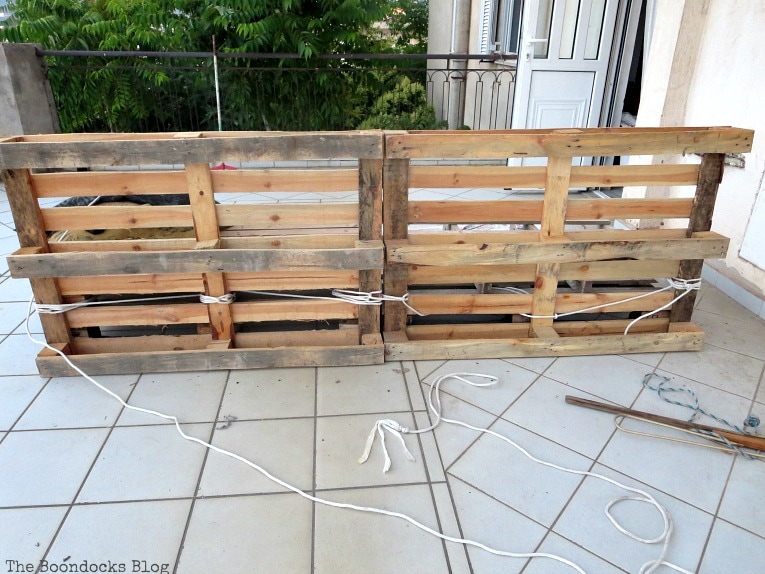 The front view.  I then threw some old cushions on top…
​ 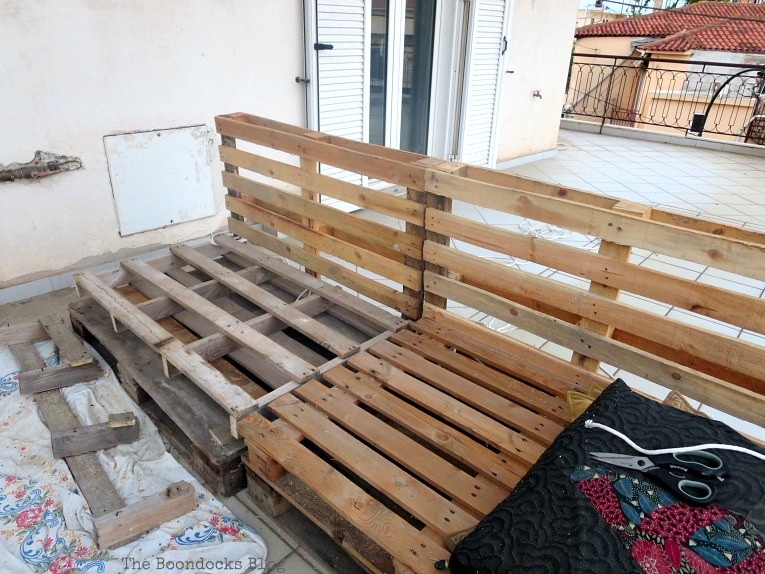 … covered it with a piece of fabric and added a bunch of pillows! It also serves to add a bit of privacy.  One side of this balcony is looking onto a major street.
​ 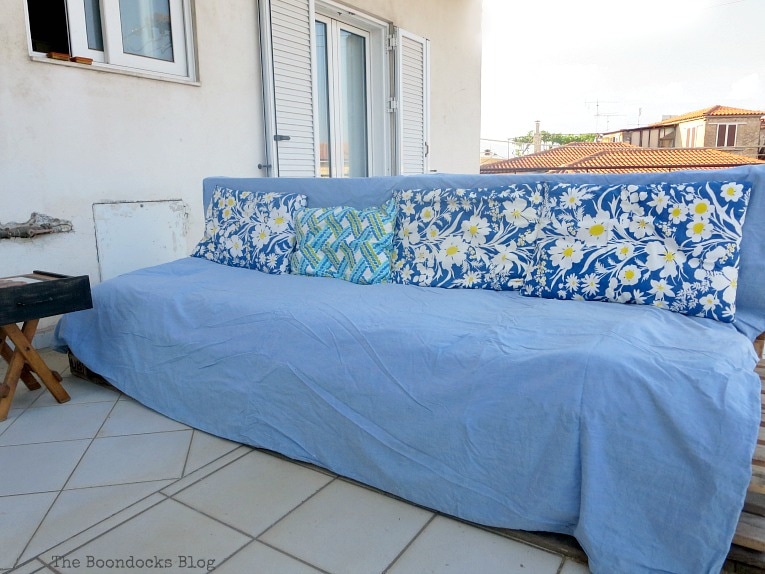 I added a red throw to my “new” outdoor furniture to give it a pop of color and I was done! ​All in all it took me about 15 minutes! Did I mention fast?
​ 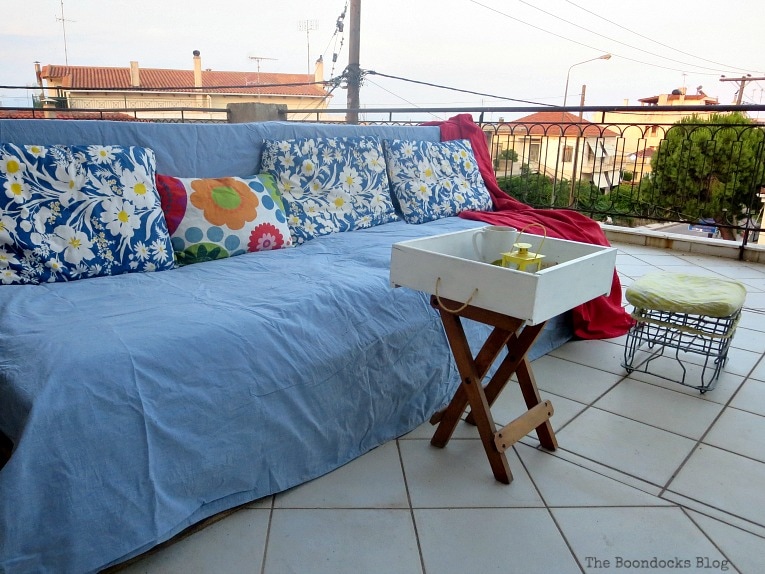 The little table you see in the front is one I made a few years ago with a stool and a drawer. And the stool is from an old upcycled vintage milk crate. ​
​

The chalkboard was another “gift” left behind from the tenant who neglected to pay the rent.
​ 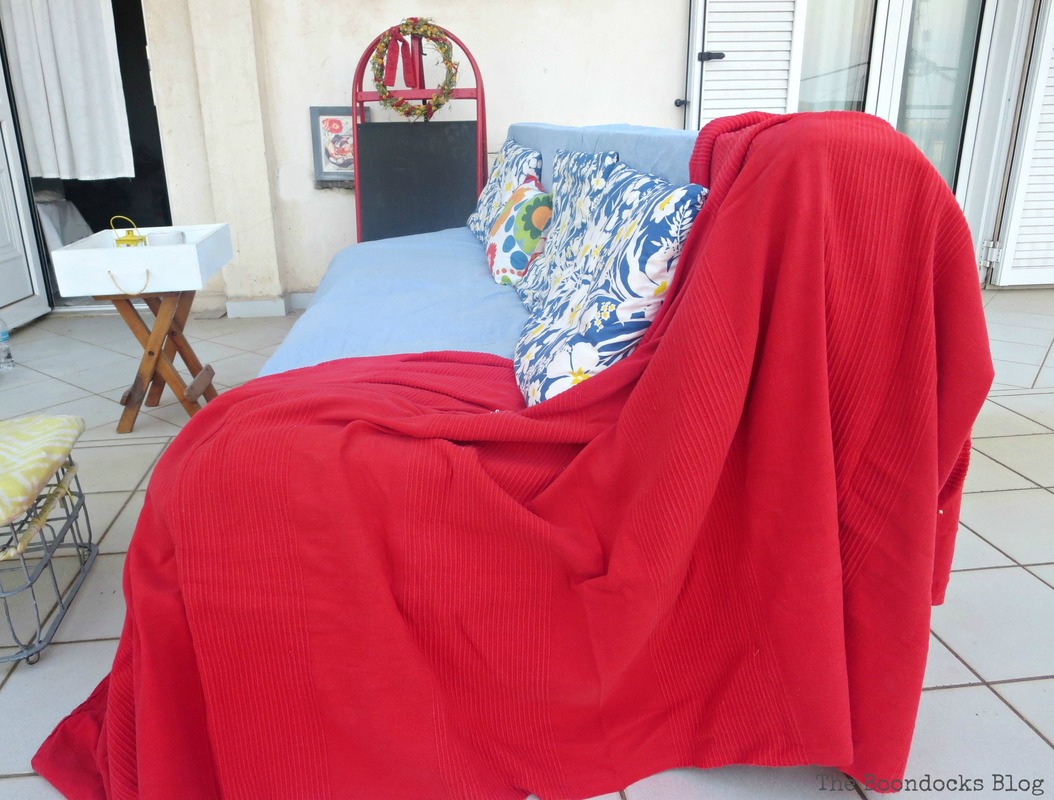 Sometimes you just want a quick project with a big impact.  Well I would definitely say this one fit the bill.  Oh it is not perfect but for this tired lady who wants to enjoy her balcony it is so close to amazing!  All in all I would say not bad for 15 minutes of work!
​ 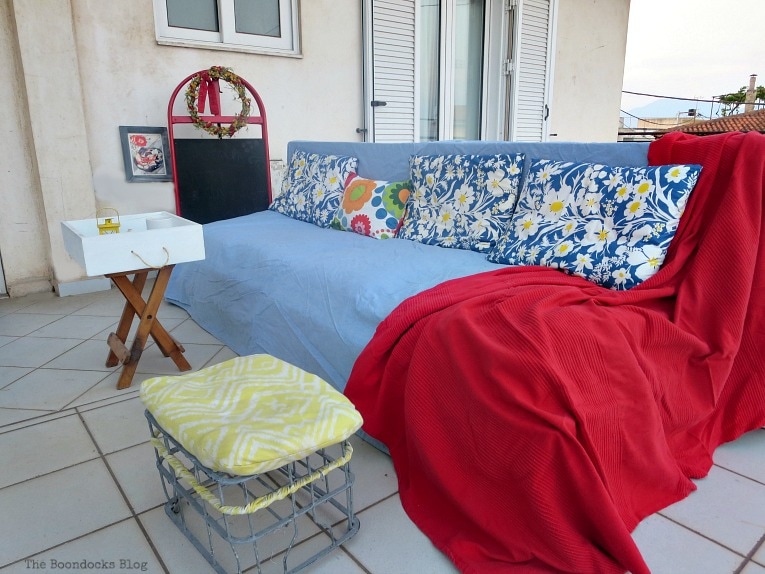 And if I’m feeling risque I can tuck the fabric in like this and expose the pallets on the bottom. I added colorful cushions – maybe I’ll change them up next year with some of these creative DIY throw pillow covers!
​ 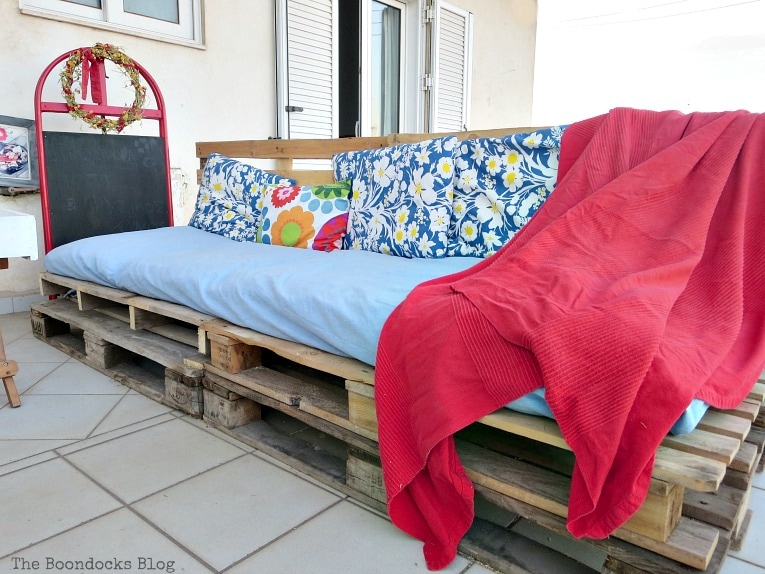 Opposite this DIY pallet couch is the colorful fence with faux flowers. Now I’ll be adding a few more things to this balcony but so far I have made a great start.
​
And so now I have a place to sit on this big ol’ balcony. And I didn’t even break a sweat! Nor did I break the bank! That is a win-win for me any day!

I hope you’ve enjoyed my super easy and quick pallet couch DIY tutorial. Why, it wasn’t even a tutorial. Just a small hint!

What have you created using pallets?

You can see a tour of the balcony here.
​ 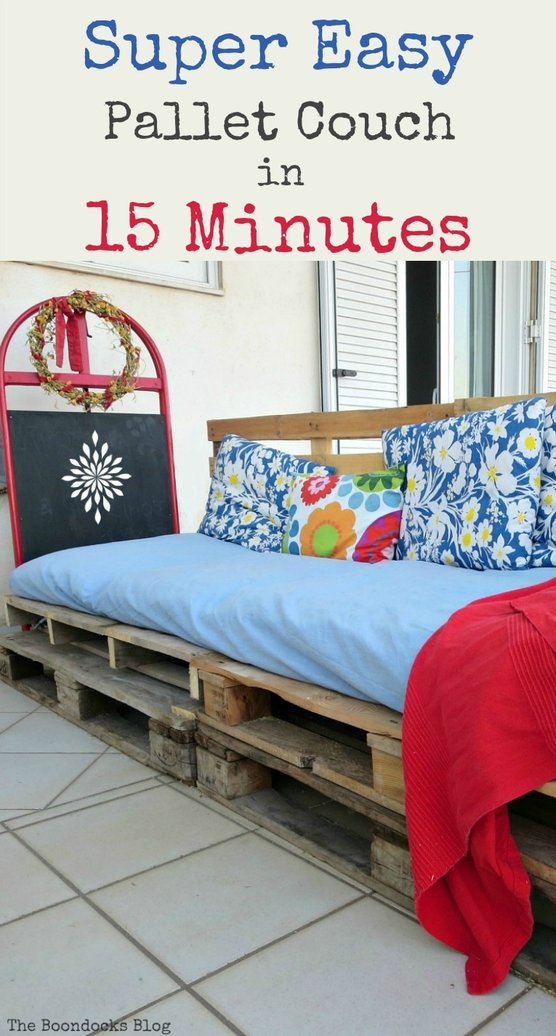 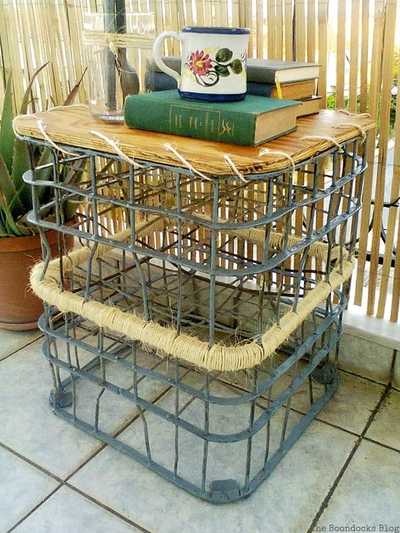 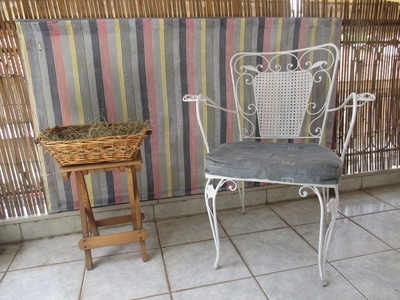 ©The Boondocks Blog, 2015-2021. Unauthorized use and/or duplication of this material without express and written permission from this blog’s owners is strictly prohibited. One photo, excerpts and links may be used, provided that full and clear credit is given to TheBoondocksBlog.com with appropriate and specific direction to the original content.