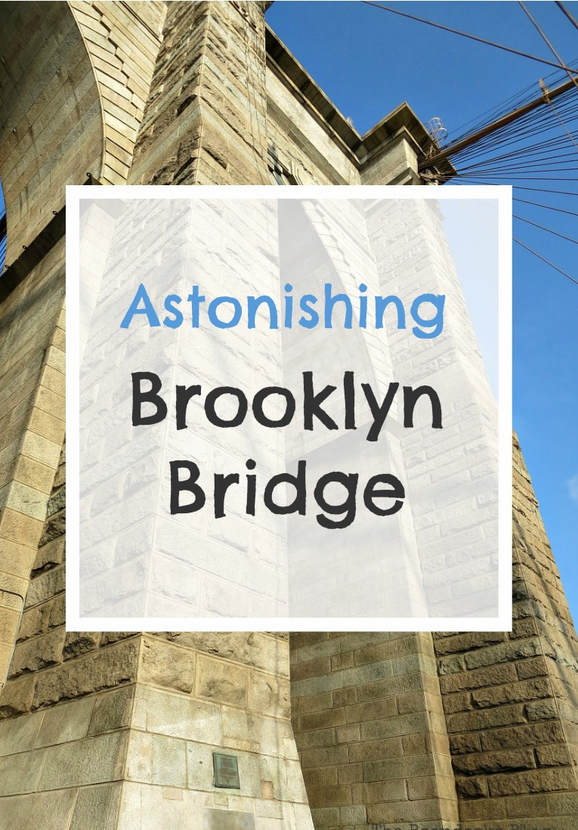 A month ago I had to go to New York’s Lower Manhattan to take care of some business with my son and when we were finished he suggested that we should walk across the Brooklyn Bridge.  After all it was right there waving at us.

And that is exactly what we did.  Today I’d like to take you along with us … on a tour of the astonishing Brooklyn Bridge walkway. 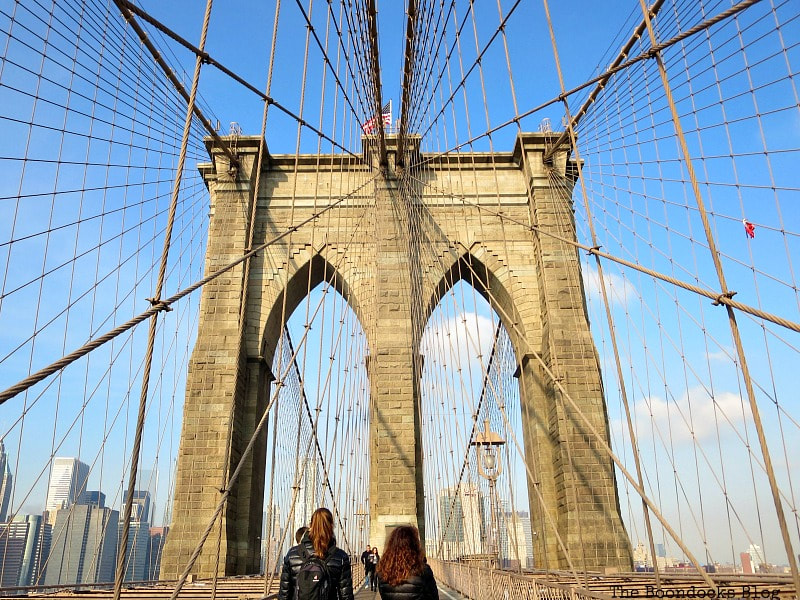 For those of you that don’t know the bridge spans almost 6,000 ft. (1.8 Km) between Manhattan and Brooklyn and underneath is the east part of the East River.

This is the entrance to the bridge on the Manhattan side. To the right we see the Civil Center in Lower Manhattan and to the left that super shiny apartment building is called “New York by Gehry” named after world famous architect Frank Gehry.
​​ 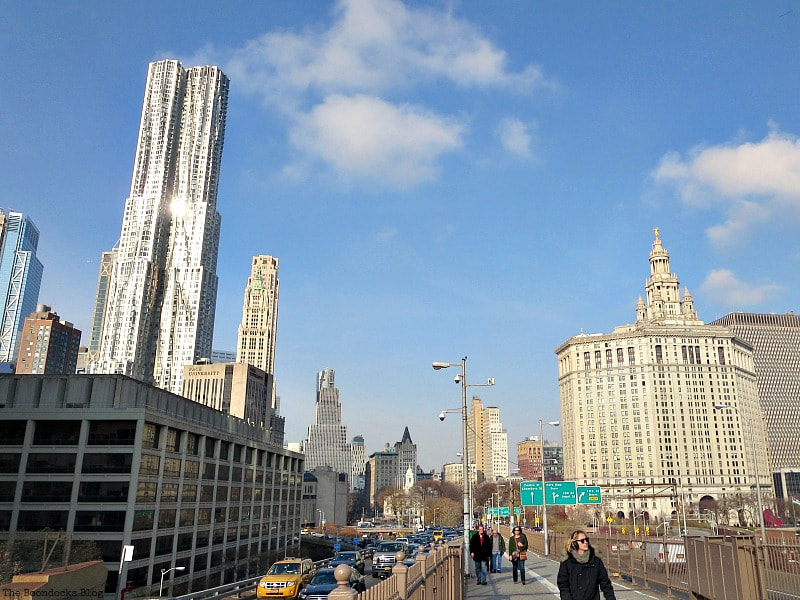 Brooklyn Bridge is a cable stayed – suspension bridge and one of the oldest roadway bridges in the US.  Completed in 1883 it has been designated a National Historic landmark.

It was conceived by John Augustus Roebling, who worked on it until he sustained an injury and developed tetanus after his toes were amputated.  He eventually died and his work was carried on by his son Washington Roebling.  Washington developed decompression sickness and was confined to his apartment.  His wife, Emily Warren Roebling assisted him for the remainder of the construction becoming the “first woman field engineer”.
​ 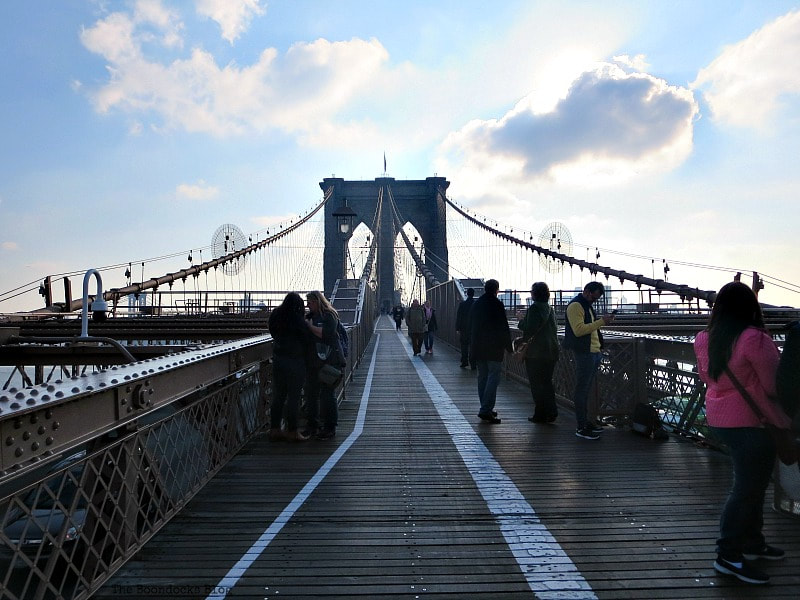 Looking south we see the Financial District and below the FDR Drive, named for Franklin Delano Roosevelt. This parkway runs the length of Manhattan along the east side.
​ 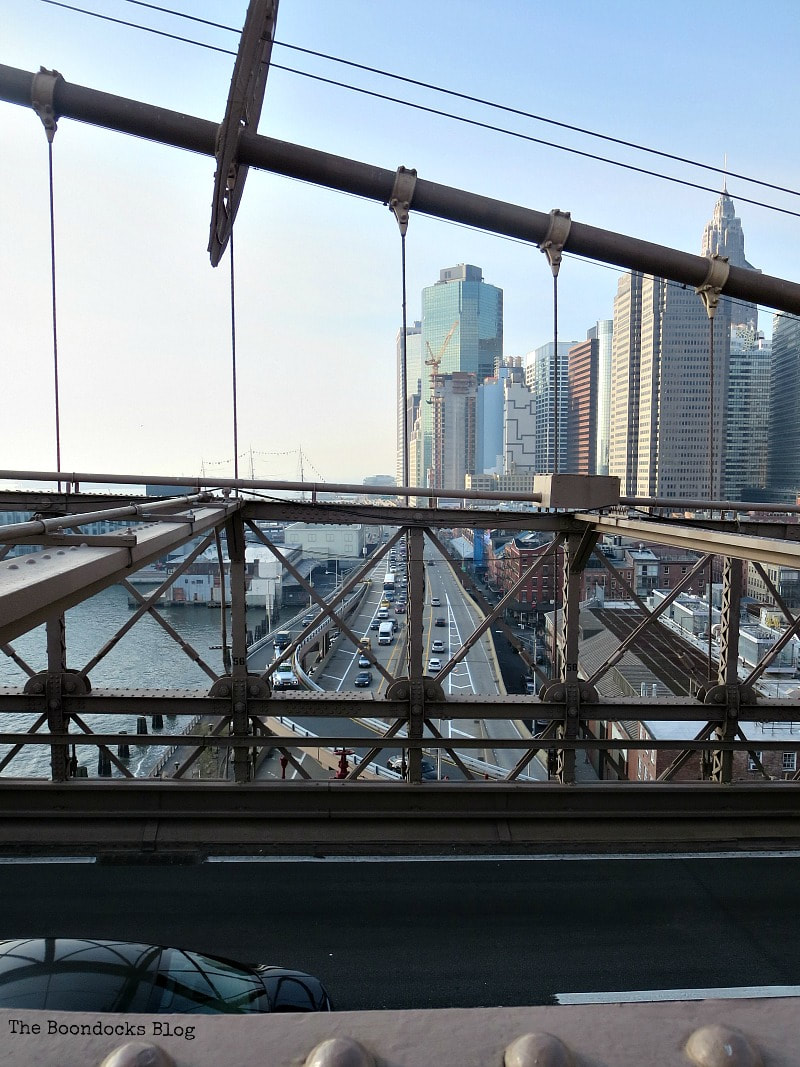 To the north on the Manhattan side we see the Manhattan Bridge which opened in 1909. It is one of three suspension bridges built in the lower East River, along with the Williamsburg Bridge and of course the Brooklyn Bridge.
​ 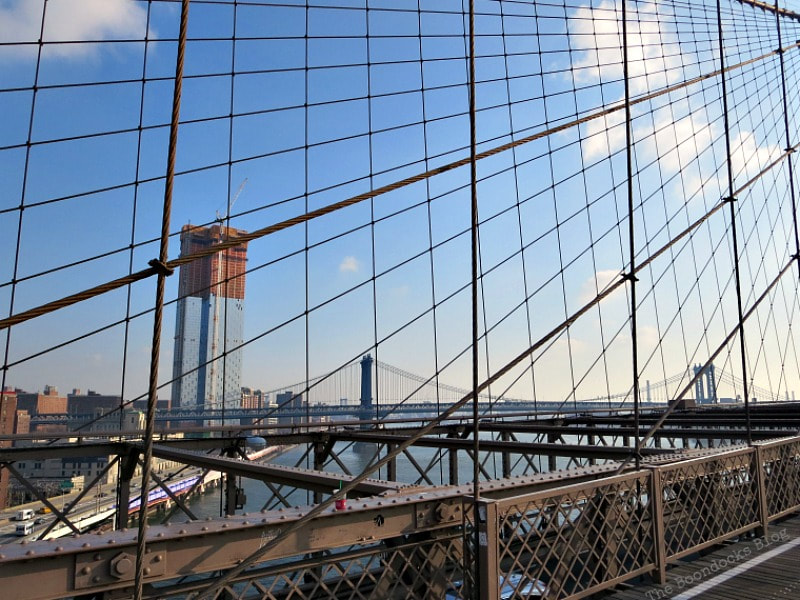 ​You can see the roadway is below the walkway.  Walking the bridge also provides us with spectacular views of the Financial District.  The One World Trade Center building can be seen in the background.
​ 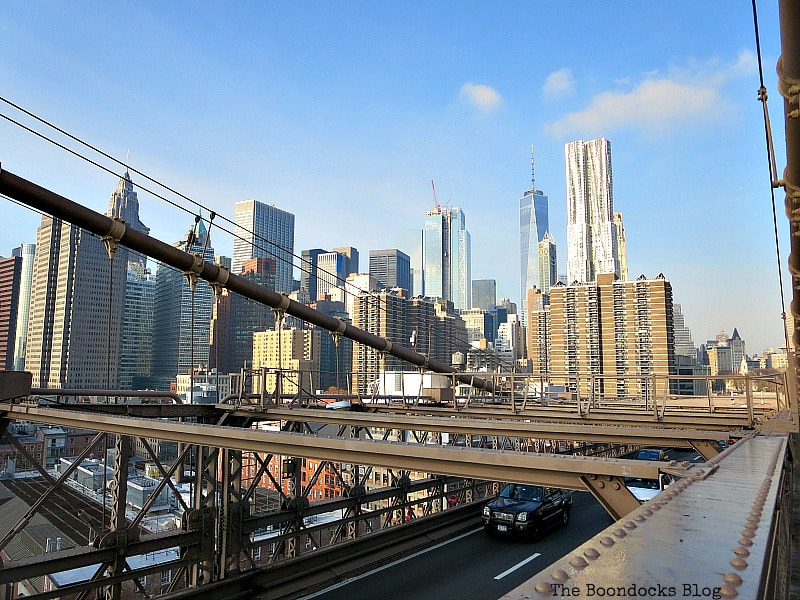 As we near the first set of Towers we can see how massive they are and also the walkway for the pedestrians.
​ 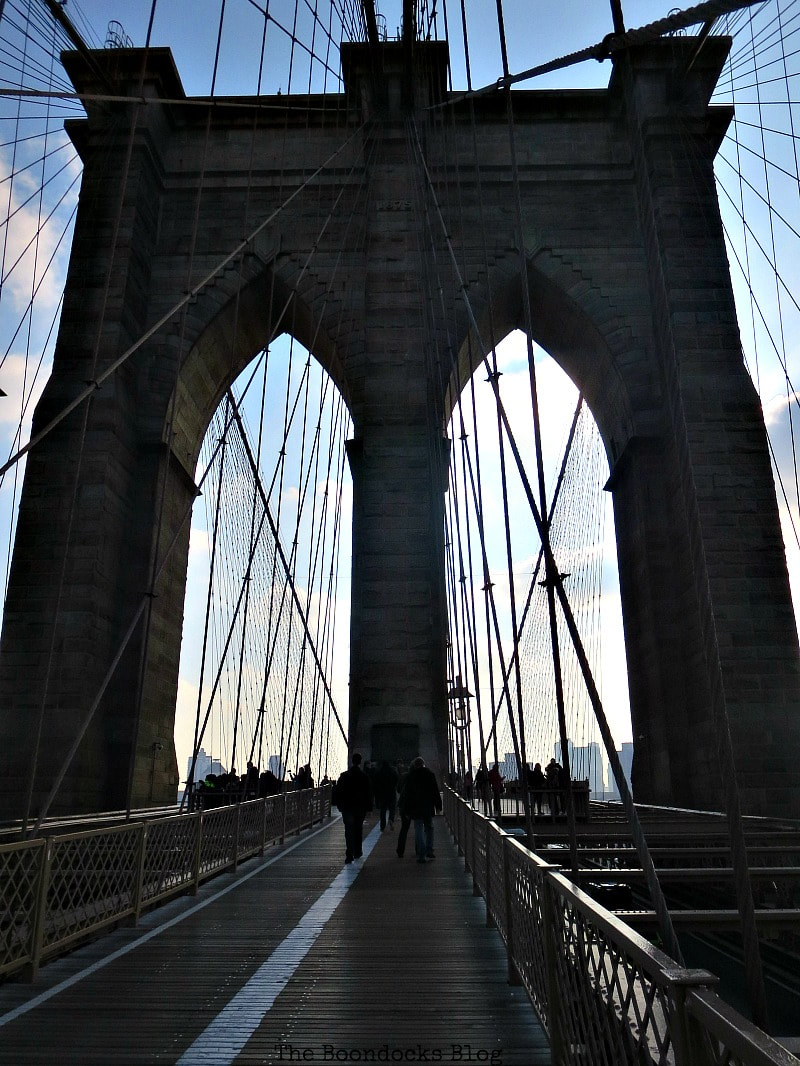 ​Another view of the Financial District.  On the day we took this walk the weather was partly sunny and not too cold,  but it turned out to be perfect for photography.  I love the way the light is gently caressing the buildings here.
​ 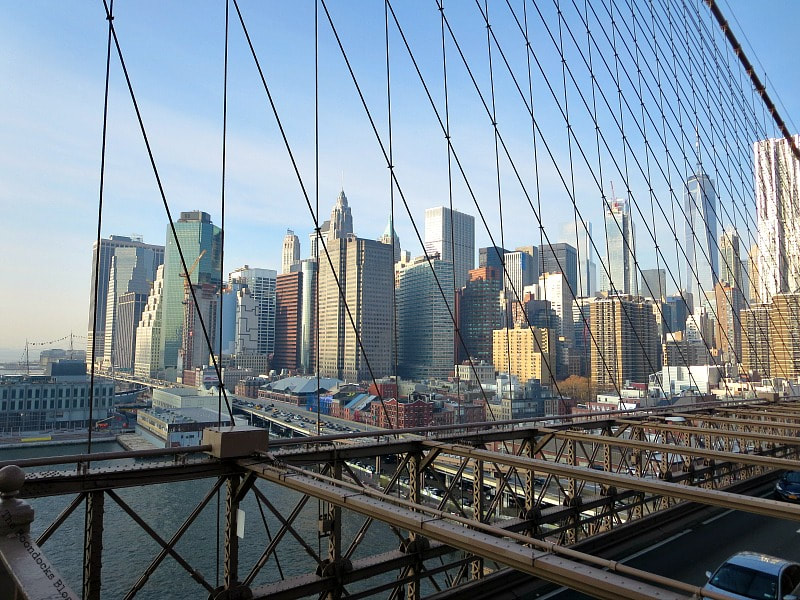 Looking North again we see a group of buildings and the Verizon tower to the left.
​ 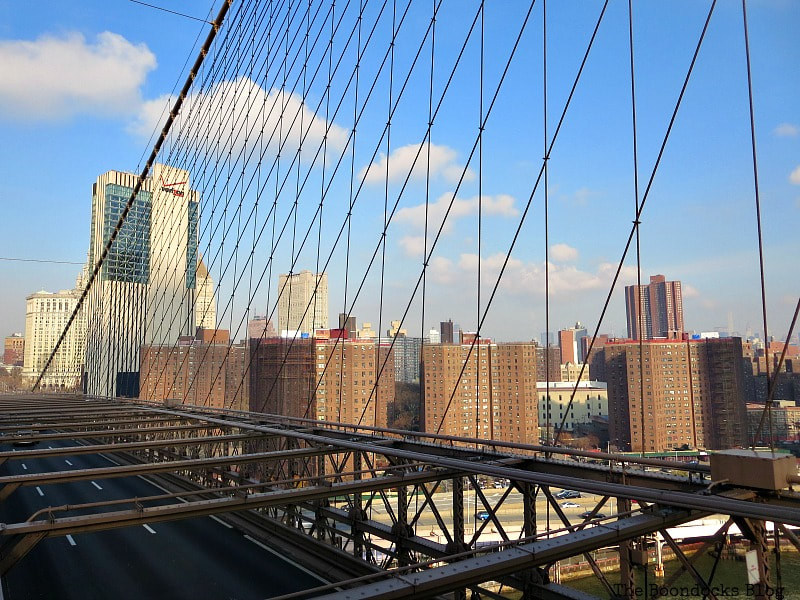 ​On either side of the pedestrian walkway are the roads for cars. Originally the bridge carried horse-drawn and rail traffic.  Now there are a total of 6 lanes for cars and railroad tracks for the trains.
​ 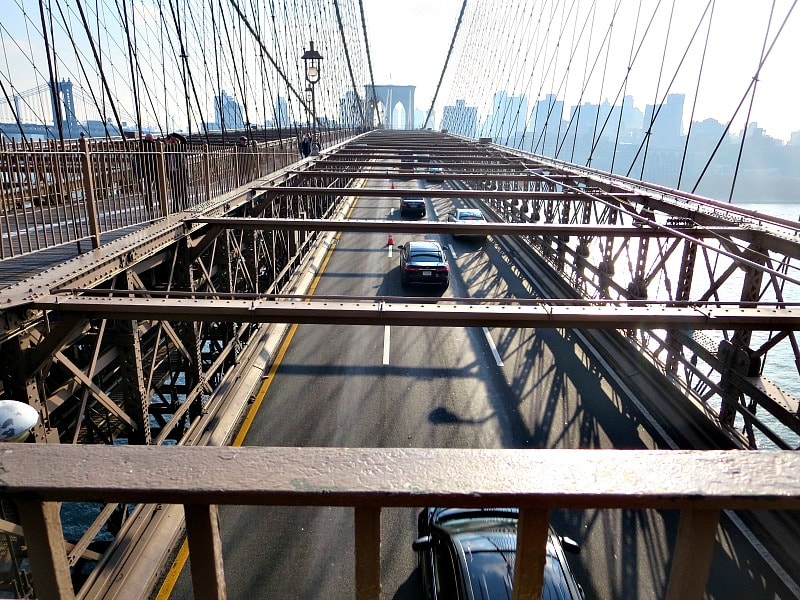 Far off we can see Governors Island and to the left Brooklyn. 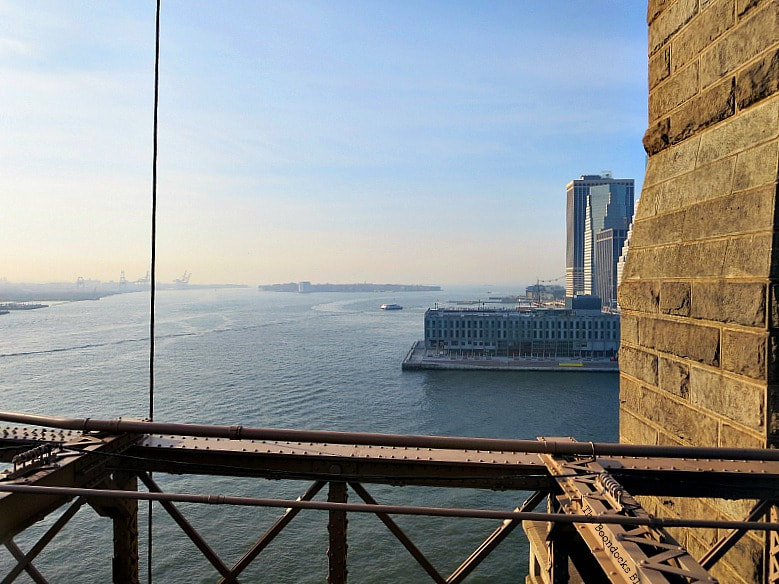 ​The Towers were built in the Neo Gothic architectural style with  limestone, granite, and Rosendale cement.  The vaults below the towers were rented out by the City in order to fund the bridge.
​ 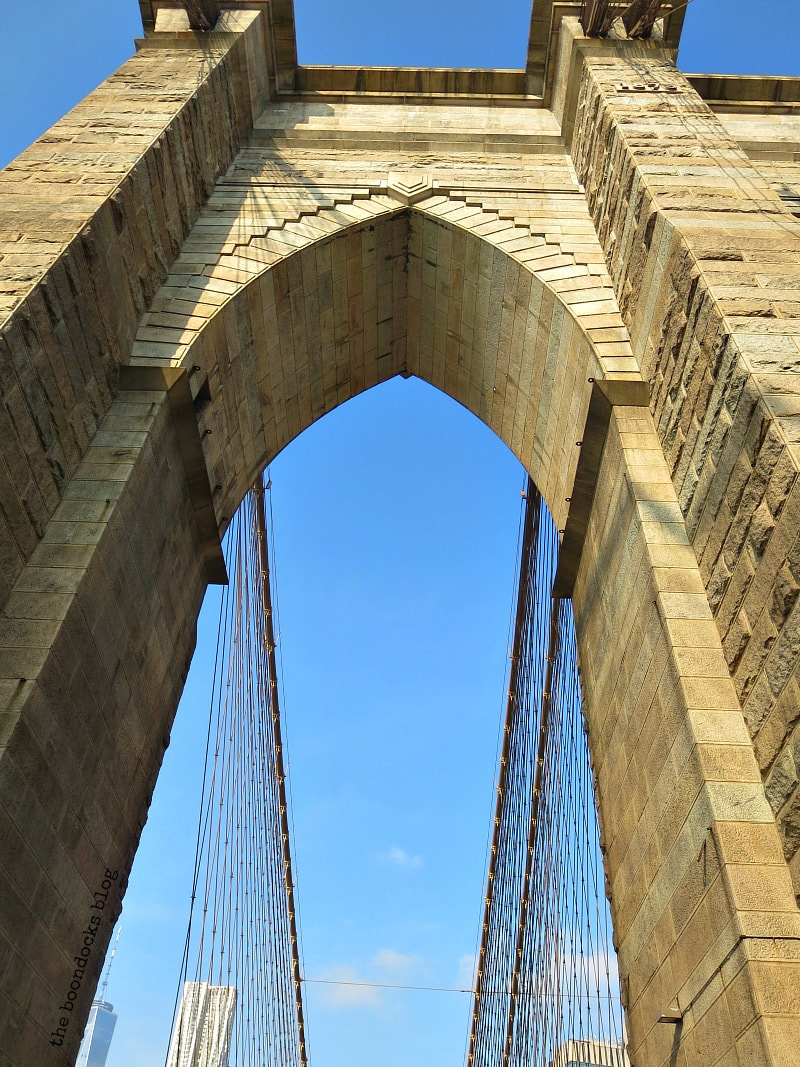 In this photo we have just passed the first tower and are looking back towards Manhattan. As can be seen there were many pedestrians and also a few bicyclists.
​ 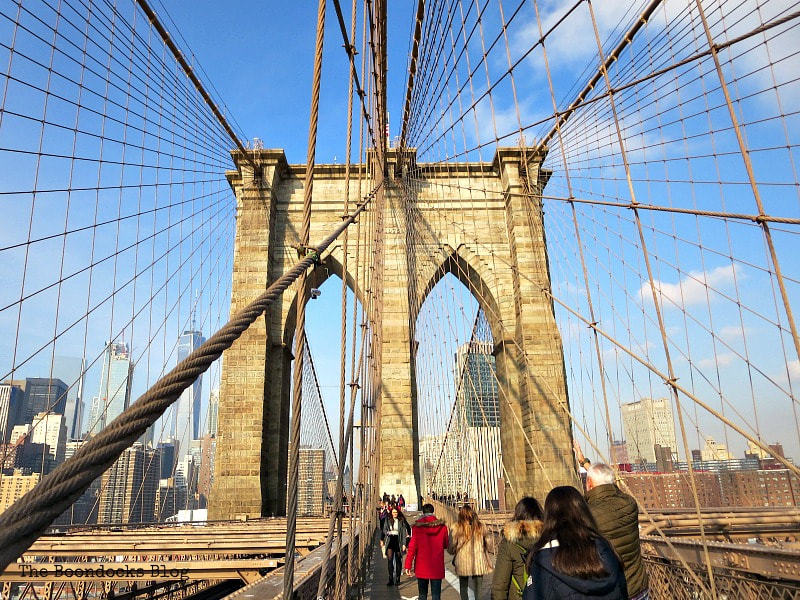 ​Below, we have reached the center of the bridge. It is worth pointing out that on the opening day of the walkway a total of 1,800 vehicles and 150,300 people crossed, and Emily Warren Roebling was the first to cross.

A few years later P.T. Barnum of the world famous Barnum and Bailey Circus led a parade across the bridge with Jumbo the Elephant, who was his most famous attraction,  and 21 other elephants. This proved that the bridge really was stable.
​ 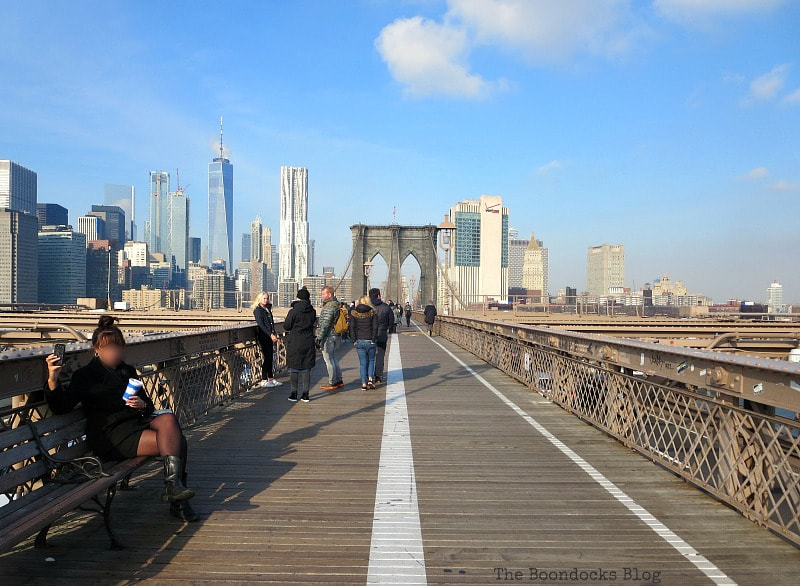 The web-like construction of the cables.
​ 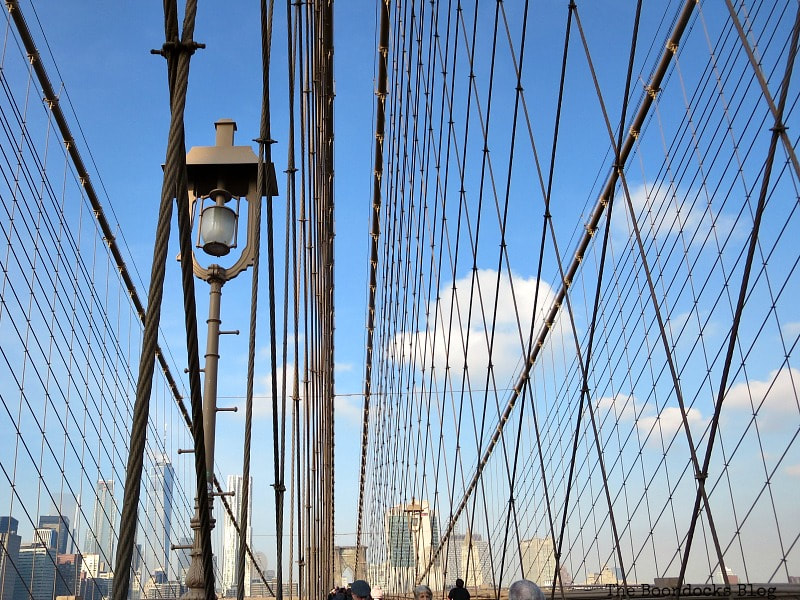 ​We finally reach the second set of towers which are on the Brooklyn side of the bridge.
​ 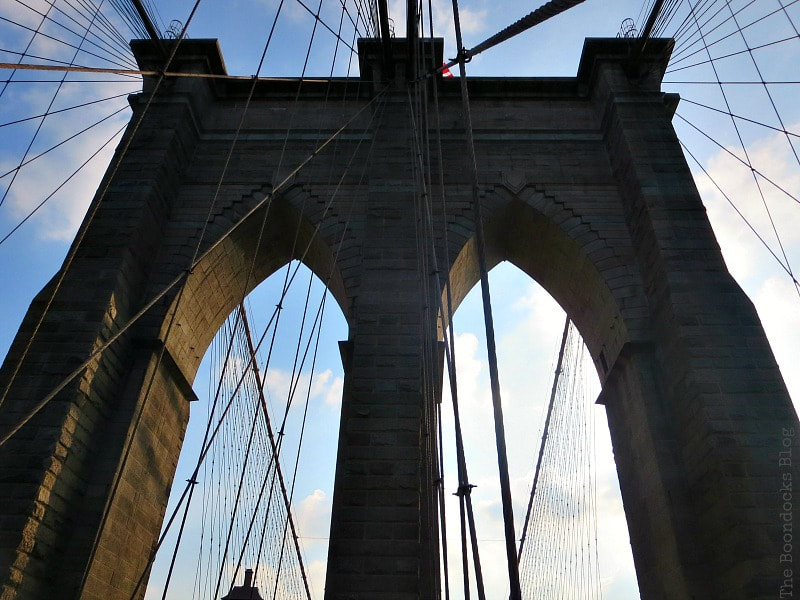 Another look at the Manhattan Bridge.
​ 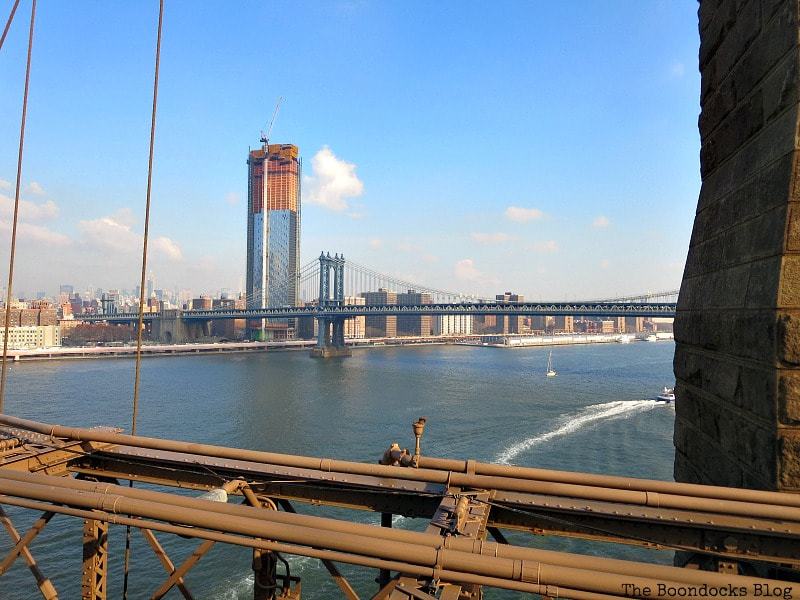 Disclosure: This post contains affiliate links .  If you purchase any of these products through the links, I receive a small commission, that way I can continue to provide you with lovely content.  There is no extra charge to you for purchasing through my affiliate links.
​
​

​​Below we can see how the walkway is built around the towers and how spacious the whole walkway is.
​ 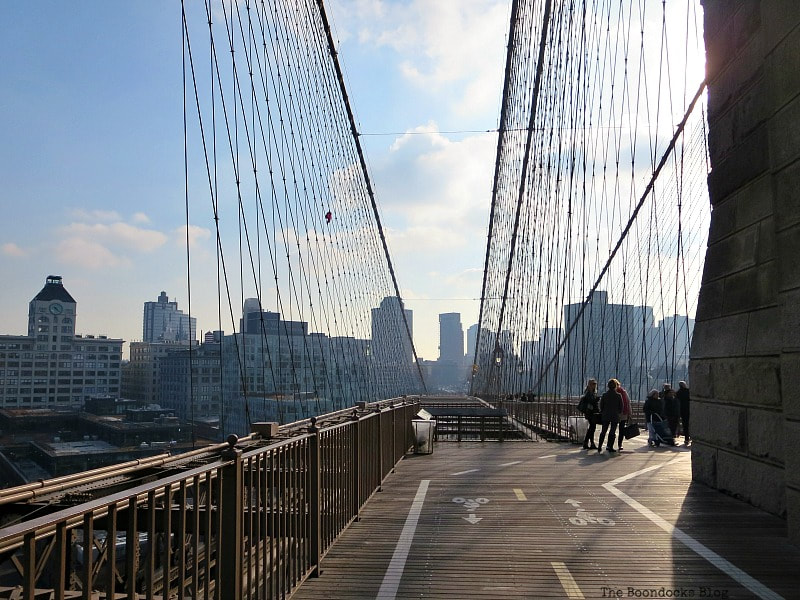 The bridge was the tallest structure in the Western Hemisphere for years after it was completed and it was named “The Eighth Wonder of the World.”
​ 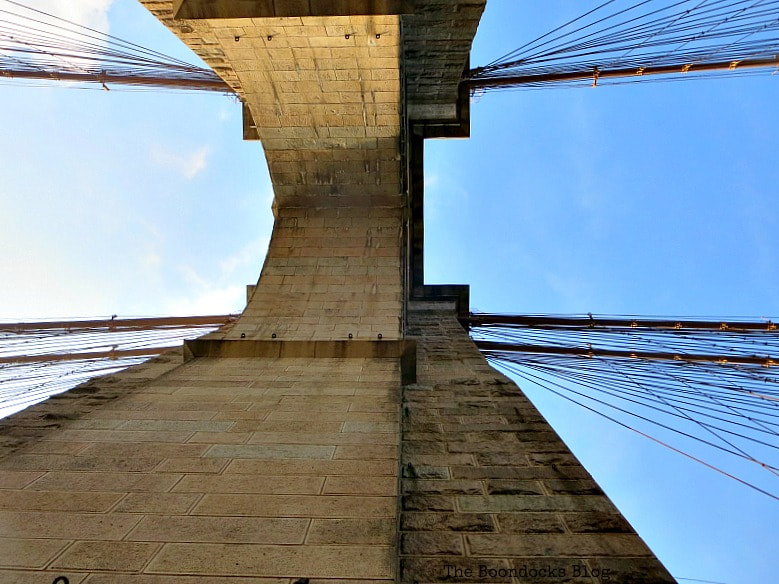 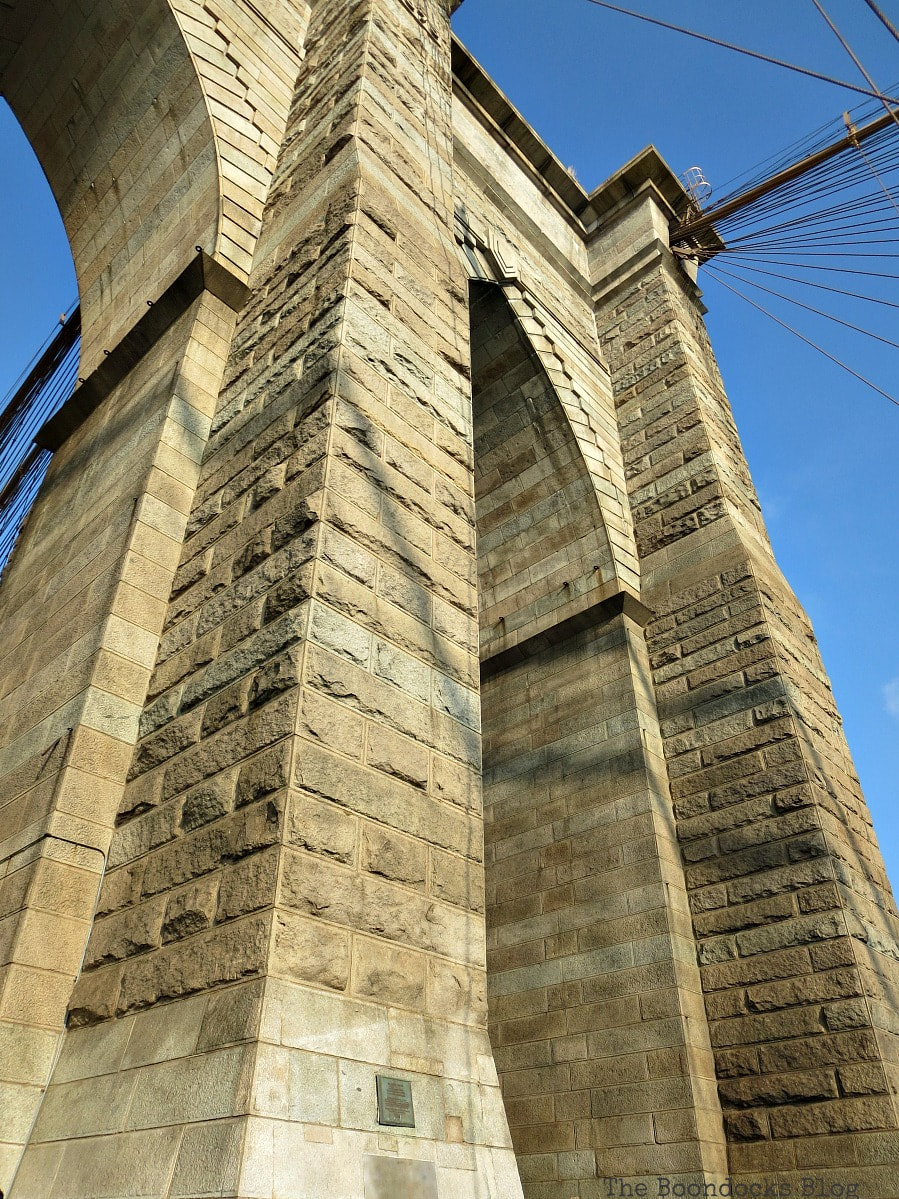 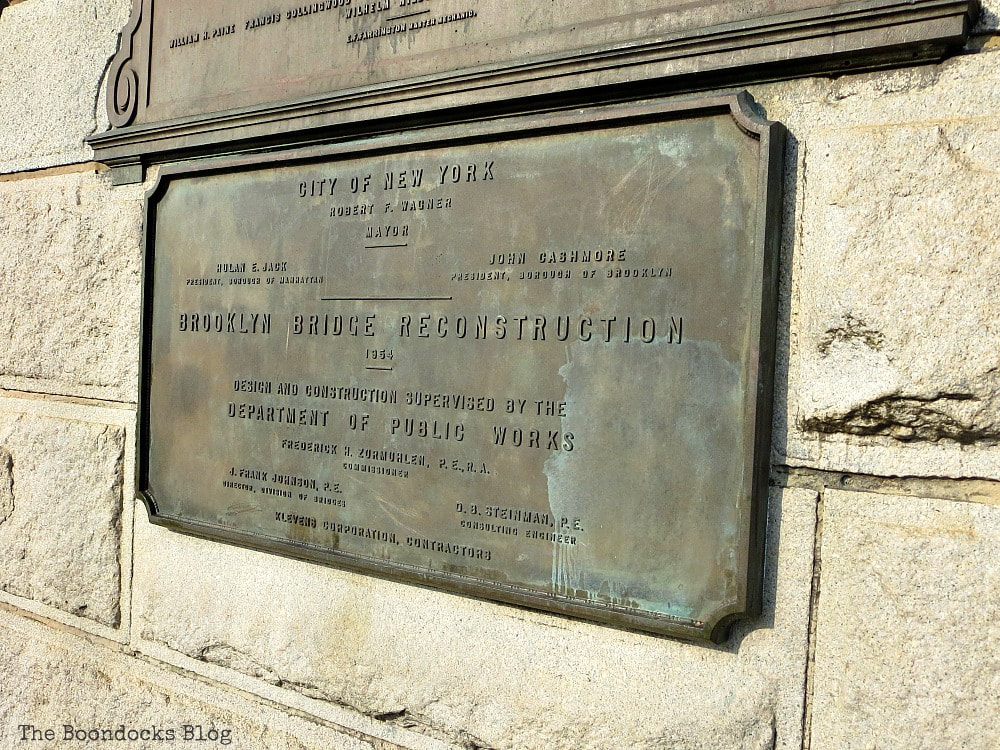 Looking south to Brooklyn Bridge Park and in the background, Governors Island. 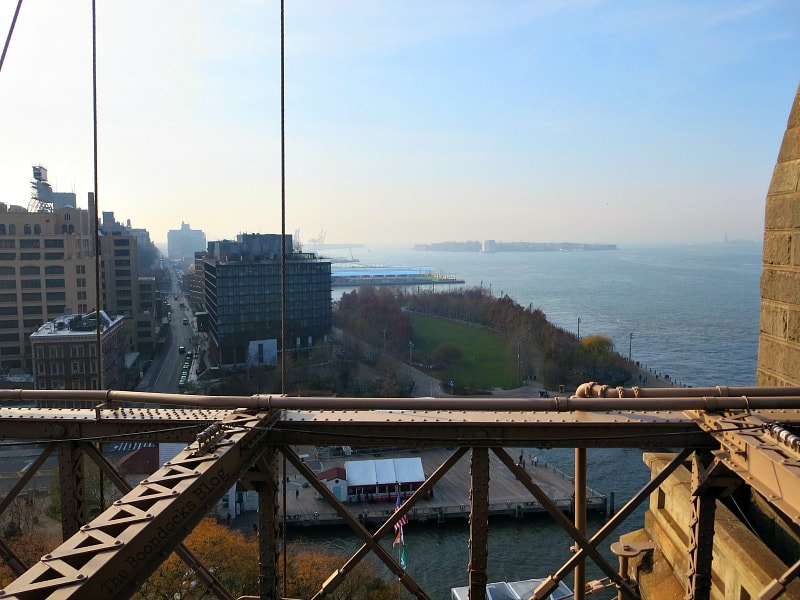 As we walk past the Towers you can see all the tourists and photographers snapping away at these amazing towers.
​ 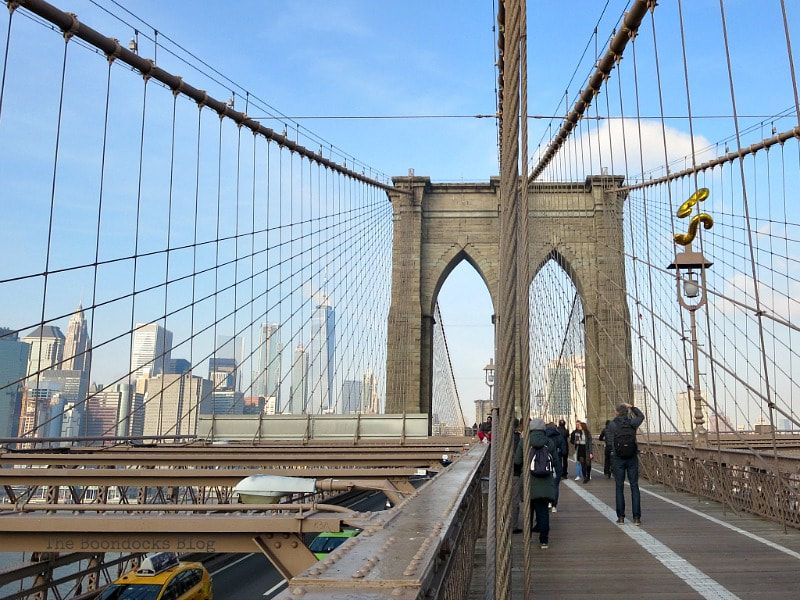 On the Brooklyn side we see the roads and buildings of the Brooklyn Heights area, an upscale neighborhood full of brownstones. The walkway actually extends well into Brooklyn.
​ 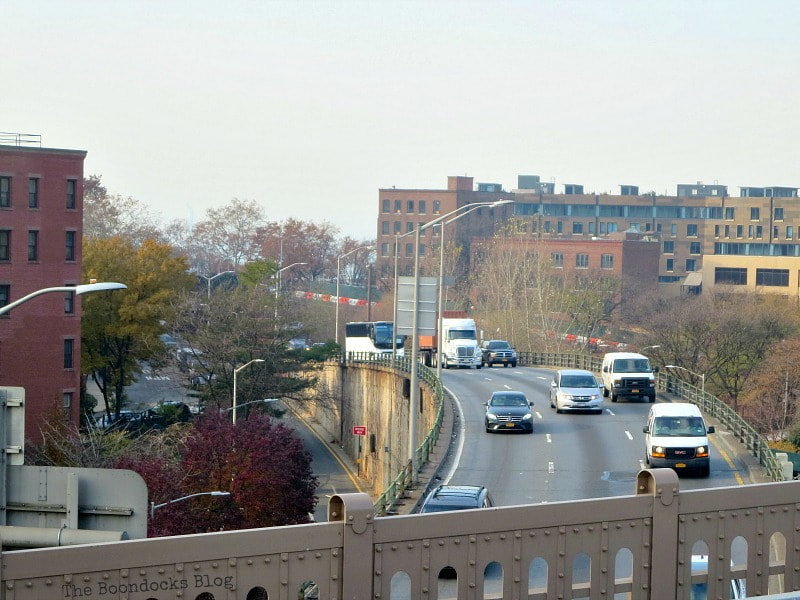 To our right we saw this interesting building 60 Water built on Brooklyn’s historic waterfront neighborhood, DUMBO. This neighborhood has actually become very trendy since it was acquired by the Two Tree Management and turned into a center for tech startups.  It it is also the home of e-commerce Etsy headquarters.
​ 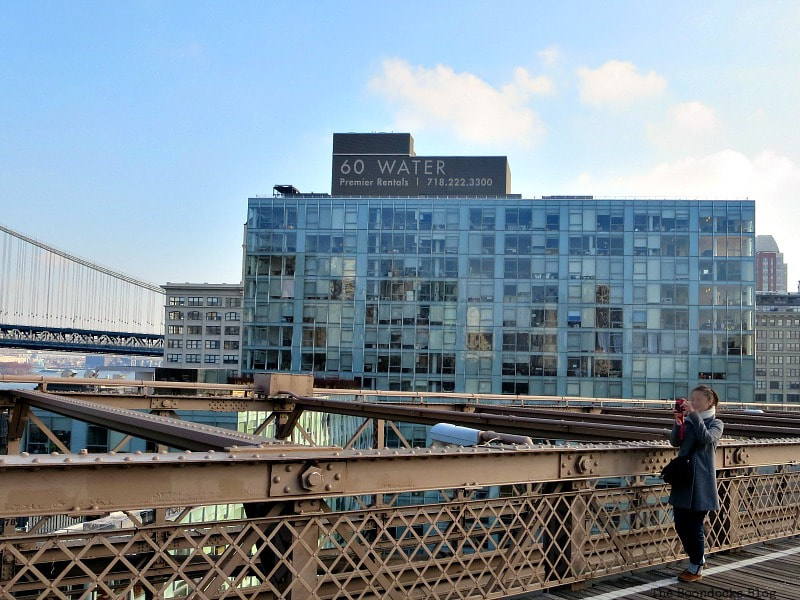 And finally we reach the entrance to the Bridge’s walkway.
​ 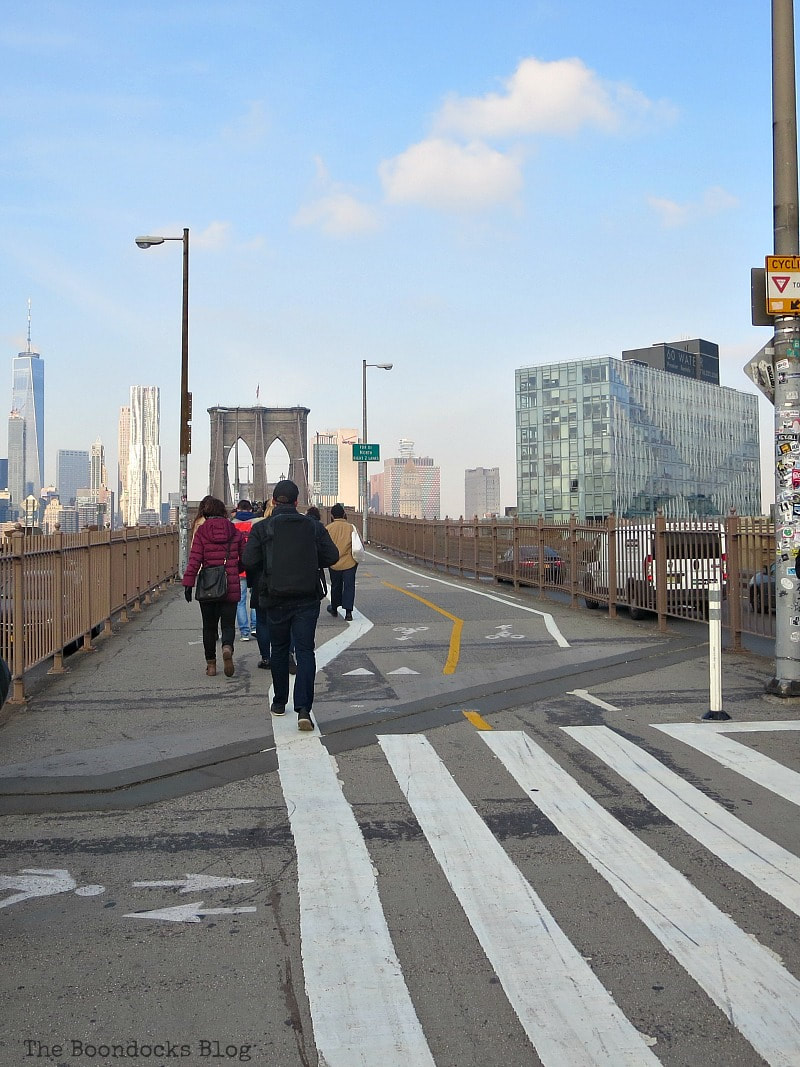 This walk took us about half an hour, not only did we get our exercise but we also got a view worth a million bucks!  I hope you enjoyed my tour of the astonishing Brooklyn Bridge, and if you’re ever in New York it is a must visit.

If you’d like to read more about the bridge and how it was constructed you can look here.  And to see more of my photography go to the photo gallery here.
​ 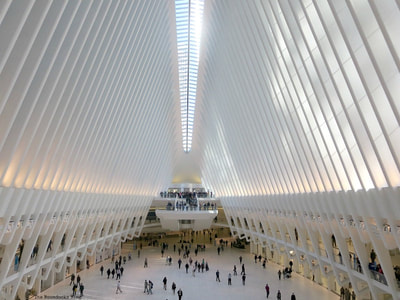 A One Way Ticket 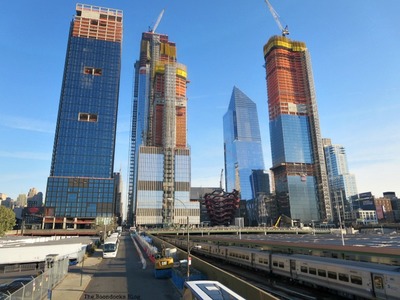 Tour of the High Line

...something that I've never seen in person. Thanks for taking my along!

Oh, I enjoyed reading this post. I have been across the Brooklyn Bridge a few times, but I have never walked it. I have wanted to, so maybe on my next visit to NYC.

Barbara, on a good day it is a pleasure to walk across. Just as if you were taking a stroll but with a fantastic view. I hope you make it soon.

Such wonderful pictures! It always amazes me how structures built so long ago are so wonderfully constructed! Thanks for sharing at The Blogger's Pit Stop! Roseann from www.thisautoimmunelife.com

Thank you Roseann this one is incredibly solid.

What stunning photos! And a great tour of the bridge. I love that you included several books about the bridge for further inquiry. Thanks!

I always go out and snap photos and then come home, research things and find myself fascinated by what I had seen.

I've always wanted to see the Brooklyn bridge up close and personal. I'm not I'll ever get the chance but with all your gorgeous photos and interesting snippets it feels like I took the walk with you and your son Mary. I'm all out of breath ;-) I really do enjoy seeing New York through your eyes

It was such an enjoyable walk Michelle I didn't get tired at all. So much to see and photograph.