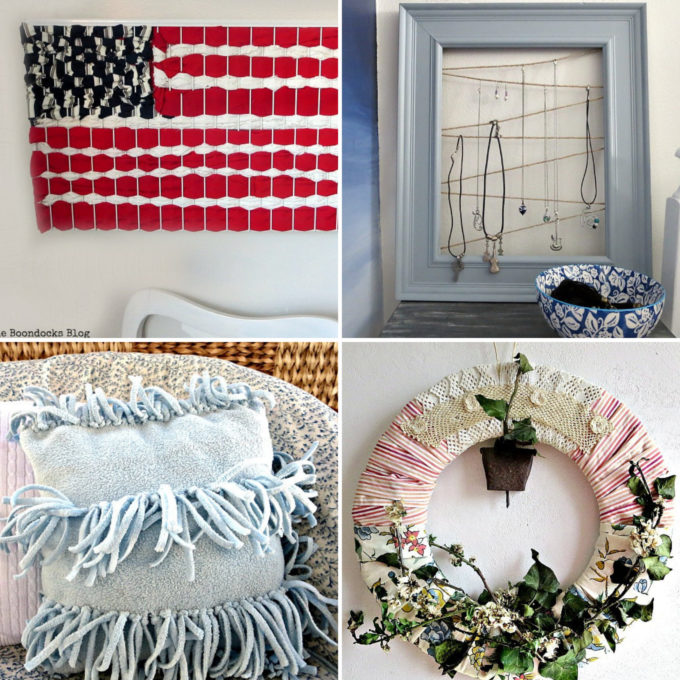 I am not a fan of throwing things away, in fact that’s what this blog is built on. ​Clothes in particular, hold a special place in my heart because they have such pretty colors, patterns and interest in general. It got me to thinking that I should share all that with you. I went over my projects and collected 15 projects that show you how to repurpose old clothes.

Get inspired with these two projects that show you how to repurpose old clothes into crafts.

This flag was created using fabric remnants and also a red skirt, which is where the clothes part comes in. At one point I had also considered using boxer shorts. It was a very easy project and very effective too!

The fabric scraps you see above were once a part of a dress and a skirt. I think they make a lovely embellishment for the wooden box. There is nothing that escapes me, as long as I like a pattern it is not safe!

This project features an old jersey t-shirt which belonged to my daughter. It was stretched way out of shape and the only thing to do was to stretch it more and turn it into a cover for her chair.

I’ve also done this using flannel shirts. And here is another one with  a blouse turned into a stool cover.

The chair on your left with the grey seat cover was made from a sweat shirt. Again, it did not fit anyone except for the dog. But at that point we hadn’t adopted him otherwise it would have become a dog sweater.

Speaking of which, another great idea for clothes is to re-purpose them into dog toys. Lina of Sew Historically has many great ideas!

Add an old picture frame with your repurposed clothes and you’ve got yourself new art and even a useful jewelry organizer.

I also used the same idea as a backdrop for these Christmas Wreaths. And the fabric was boxer shorts! In fact, this is a great idea to showcase a wreath at any time of the year, not just Christmas.

​I need to go and make a few more of these for the rest of the seasons! (It pays to look back at your work because you never know what you’ll remember that you had originally forgotten!)

​This earring organizer was one of my all time favorite projects. Behind the doily is a blue backdrop, which was once a satin blouse. You could never tell that it had such fancy beginnings.

​I even used some of the same fabric as sprint art.

With so many clothing options there’s more than enough old fabric to make a new wreath for every season.

The blue fabric you see on the wreath/lifesaver below was cut up from my an old jean dress of mine. And that white ribbon was actually a belt.

Another wreath in which I used belts is this one.

​This summery lopsided wreath boasts a skirt, a shirt and I honestly don’t remember what the red was. I think it was gauze material from a skirt which no one ever wore.

Here is another skirt wreath which was maybe too much but it gives you an idea of what you can do with the right fabric. ​

The little bits of cream lace you see at the top of this spring wreath was actually a collar from a dress of mine back in the day when we used to wear such things. It had served its purpose on the dress but it looks much better on the wreath!  ​And the striped fabric was from a shirt of mine.

I’ve also used bits of a green velvet dress to jazz up this holiday wreath.

​How to Repurpose Old Clothes as Pillows

And finally check out how to repurpose old clothes into pillows. They’re my favorite repurposed project!

We have a few tee-shirts that once belonged to the girls. But the best one was the “Adidas” sweatshirt which I managed to turn into a pillow without having to cut it at all. You can see the full tutorial here.

The white pillow with the yarn wrapped around was once a sweater and the lace pillow to your left started out as a dress.  ​

​Can you guess what the blue fleece pillow was made from?  It was once a fringed scarf that had been stretched so thin that it had to be re-purposed.  Most of the work was in knotting the fringes.

These were all sweater pillows. The round bolster pillow was actually not cut at all because the neck and sleeves were tucked into the body of the pillow.

And let’s not forget Christmas stockings which began as a sweater.

This backpack, which belonged to my daughter, had a sticker in the front which was advertising for a soda company. Needless to say it did not look pretty, so we took an old dress and added fabric to the backpack. I even added it to the straps.

Technically I am not hiding things with this idea but pieces of clothing cut into rectangles or squares can be used as gift wrapping.

How to Repurpose Old Clothes

And that is my list of clothing re-purposes. Honestly, I did not think I had that many to share with you.

I’ve been doing the Marie Kondo Tidying Up method of decluttering but I still keep my favorite fabrics – because they bring me “JOY”!!

So next time you are de-cluttering and getting ready to donate something, or throw it out “gasp” take a good hard look at it first.

Maybe the texture is interesting?

Once you’ve narrowed it down, put it aside in your “to Re-purpose” stash and I know you will come up with loads of ideas!  And I know my 15 ways to re-purpose old clothing into something new will come in handy!
​

Mary, you're so creative. I usually donate the kids' old clothes, but there are a few pieces I have tucked away. I thought they would make great projects...now to find the time to conquer that bag!

I donate tons of clothes, but there are some that are just too special to get rid of.

So many wonderful ideas Mary. Cleaning out my closet has been on my to-do list forever, just ask Shaun :D I still have things in there that I wore when I was at school. Mmmmmmmm not good, they're almost antiques now :D Great idea to first check if they can be repurposed into something for our home. I especially like your idea of making them into pillows. A girl can never have enough pillowcases in my humble opinion

Michelle, Marie Kondo has had quite an impact on my but one thing I will not throw out is fabric because it brings me so much joy! And yes you can never have enough pillow cases.

Great ways to use old clothes Mary! I never think of repurposing the fabric, I give it all away to Goodwill. I need to think again before I do! Thanks for the inspiration!

I live most of it away too but sometimes a certain pattern or texture will grab my eye and I just have to hold onto it.

You are just brilliant Mary!! Of course old clothes could be used for all of this. My mom is great at some of this...not so much the wreaths and recovering, but trying not to waste anything. She likes to make flower pins from any leftover material even after she shortens pieces...ha ha!! I'm pinning this for future use!! XOXO Jodie www.jtouchofstyle.com

Your mom is very talented and right in doing that. We have become a society that is so wasteful and especially with all this fast fashion which falls apart after a few times wearing it.

Mary, WOW!! I am totally amazed at all you have done with old clothing!! Amazing!! Such a talent!! Thanks so much for taking the time to stop by and to comment!! Hugs, Debbie

Thanks Debbie, you never know what will catch my eye.