0 shares
What do you do when you have a room to transform on a minuscule budget?  You Do It Yourself of course. But you also take into consideration the occupants of the room!

For the past two months I’ve been sharing various furniture makeover projects with you. And finally after all this sweat and toil, I am ready to show you the girls’ mostly black and white bedroom in full.

​I’ve included links to all the projects at the end of the post.
​ 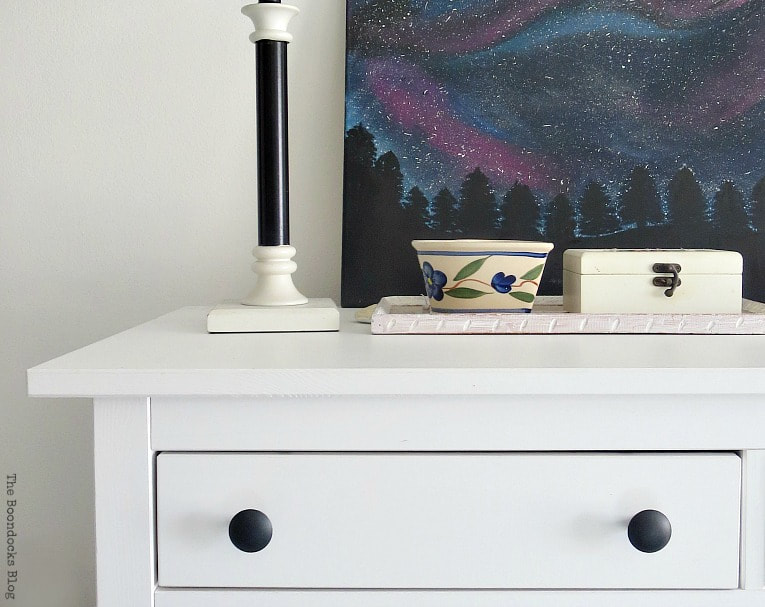 The first item we had bought was the Hemnes dresser you see above and we planned to build a black and white theme around the room.  If you recall   from my first post, my two daughters share the room and they each have their own style.  So instead of having each one filling her half of the room with her personality, we opted for a minimal look that would give them a sense of tranquility and calm, while allowing for differences in taste.

It was quite a tall order.  And I’ll be the first to say I am not a decorator, but I know when something doesn’t look right…or more importantly, I know how a room makes me feel.  So I went with my gut on this one.

This is not exactly what you expect from a young ladies room but that Hemnes dresser was the starting point.  We painted the walls white….
​ 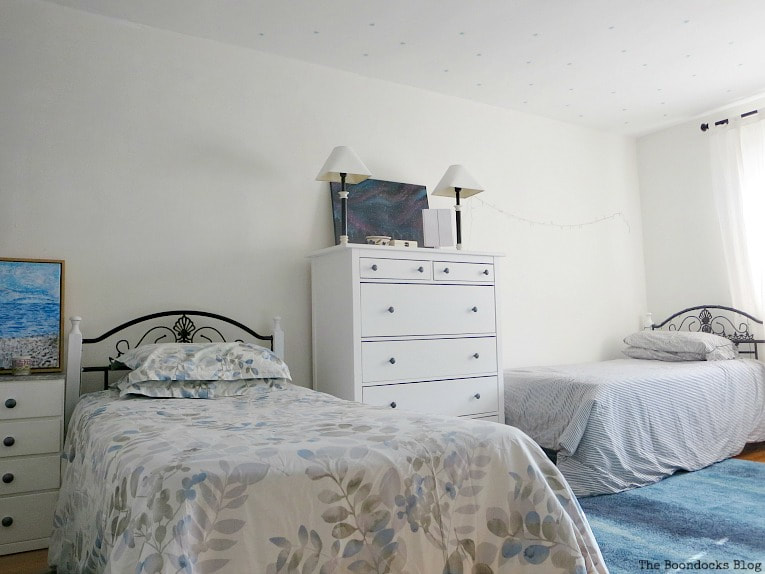 …till we got to this wall.  My younger girl wanted to do an accent wall.

At first I was against the idea but then after a read of the DIY Home Planner I relented and decided to free myself up.  After all this is their room, I shouldn’t be fighting them!  Why not go along with their idea.

And this was the result.  A reverse ombre wall with a space there on the top!  My youngest painted the wall in two days and to say that my jaw dropped is an understatement.  It turned out so much better than I expected.  It was a win-win for everyone especially since the older daughter loves blue.

Now you may think the placement of the beds is a bit odd, but this was their choice and since I had freed myself to go along with their ideas, I went along with this radical for me furniture placement.  It may seem a bit tight when you walk in but then you have this space that is anchored by the blue rug.
​

Here is a close up of that awesome wall!  It, along with the rug, really sets the tone for the rest of the room.  And let’s face it, without the wall the room would have been a bit blah… just a white box.
​ 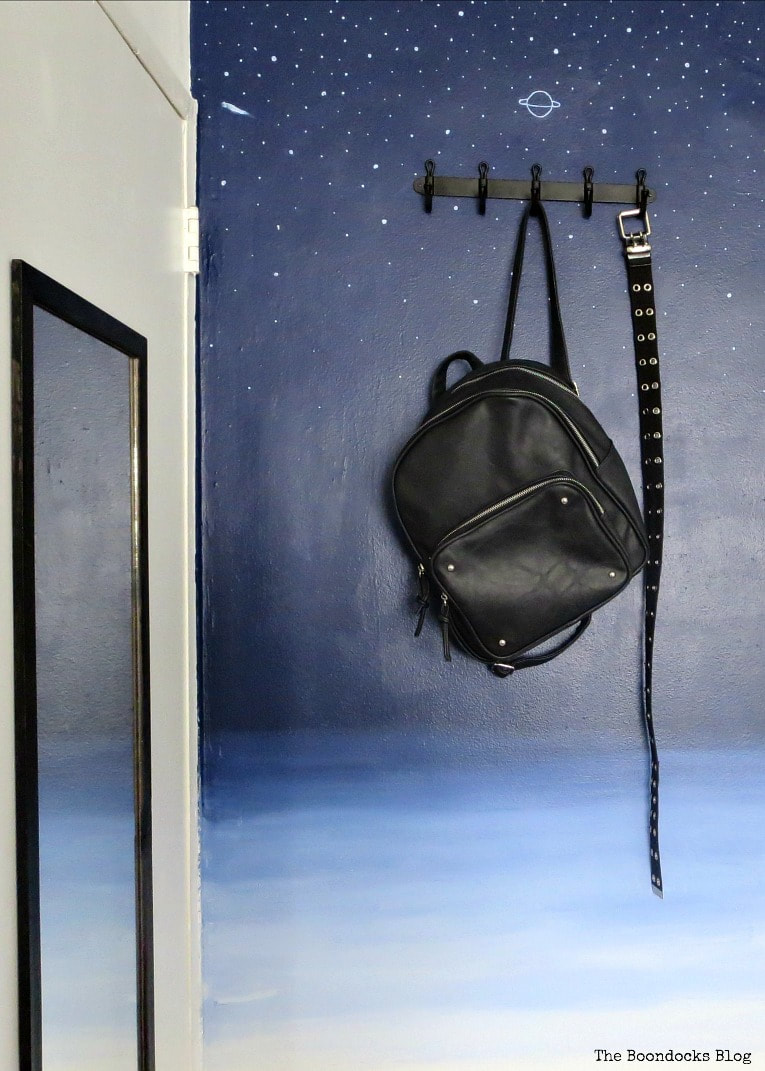 To go along with the space theme, they added lots and lots of glow-in-the-dark stars on the ceiling.  The whole room shimmers when the lights are off. In fact, we were all acting like little kids those first few days sneaking in the room to see the stars shine.
​ 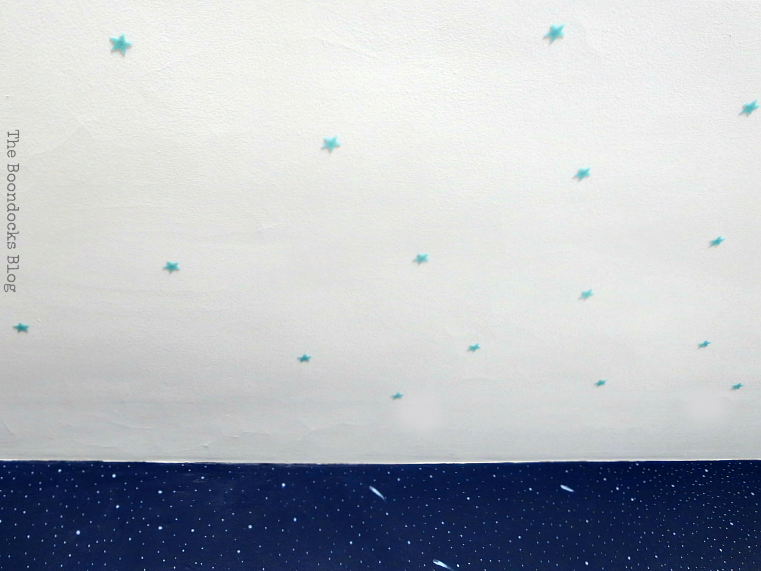 ​Disclosure: The items below are affiliate links. If you purchase any of these products through the links, I receive a small commission, that way I can continue to provide you with lovely content.  There is no extra charge to you for purchasing through my affiliate links.
​
​

This corner has the nightstand which was recently repaired and revived, and the painting is just resting on top as if it may decide to go somewhere else… at any moment.

Each girl chose her own duvet cover, so that the room was not too matchy-matchy. Aww, I would have loved matchy-matchy, but I have to respect their differences.  There was no way my blue-loving girl was going to go with a gray striped pattern. 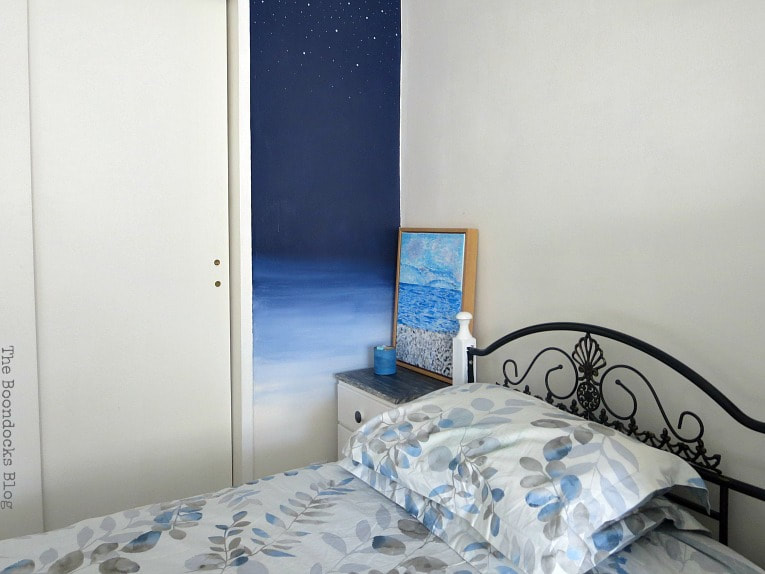 The painting you see on top of the Hemnes dresser was done by my girl a few years ago and was the inspiration for the wall.  The bed frames were painted in black and white to let the little color take center stage.

​The lamps were also  given a makeover and look nice and fresh to fit in the room.
​ 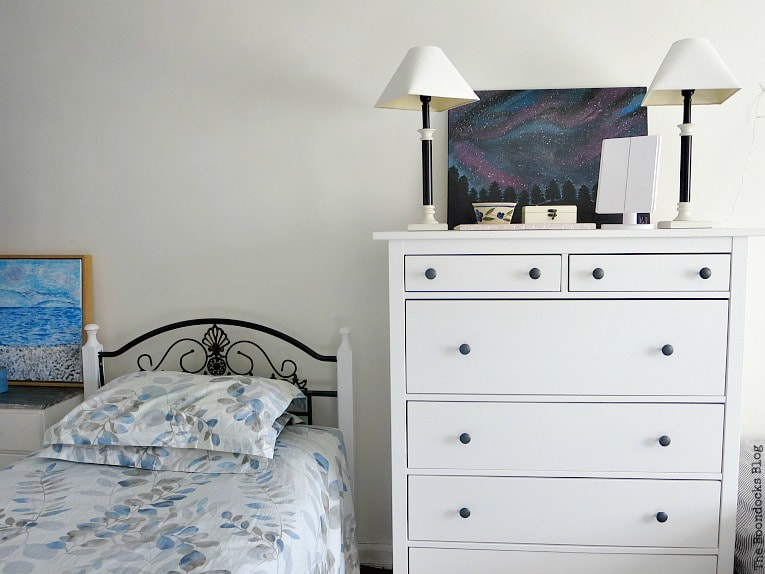 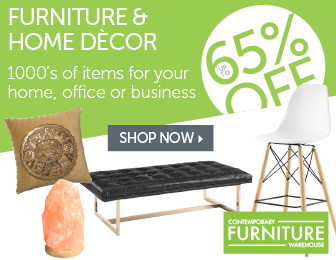 ​At this point they have deliberately not really hung anything on the walls (except for some fairy lights above the bed to the right you see below).  My younger one uses the wall as a backdrop to make her videos so she wanted a blank slate. This side of the room is very calm.
​ 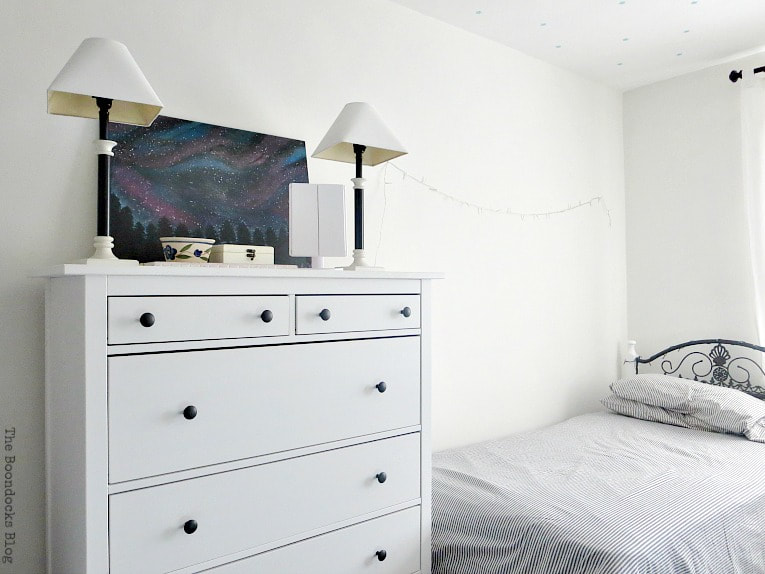 In contrast to the other side which has everything in it, and maybe even a kitchen sink! ‘wink”

This came about when I went to the basement and found the Cinderella dresser, as I fondly call it.  It was in very bad shape but I knew if I gave it a makeover and placed it between the two Billy bookcases I’d have a huge amount of storage.  The mirror was  the crowning glory.

Covering all those boxes in toile contact paper servers to unify the whole thing. Otherwise there would have been so much color, it would have defeated the purpose of the room – remember tranquil and calm.
​ 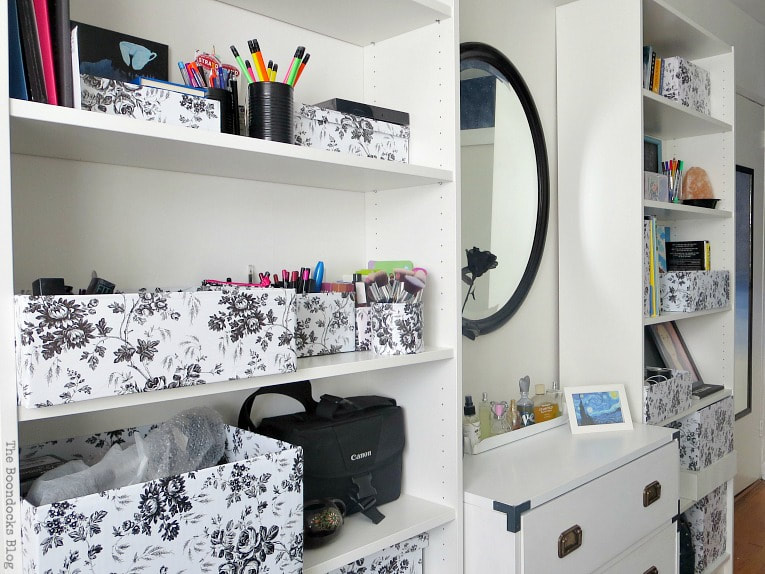 ​We’ve placed a very simple black desk next to the bookcase for the computer and the shelf on top is for a few necessities.  Actually, the shelf was there from before and we thought we would just work with it. It turns out we really like it there.

For seating the girls are using an old ottoman that has storage but this is just temporary. Although it does look rather good.
​ 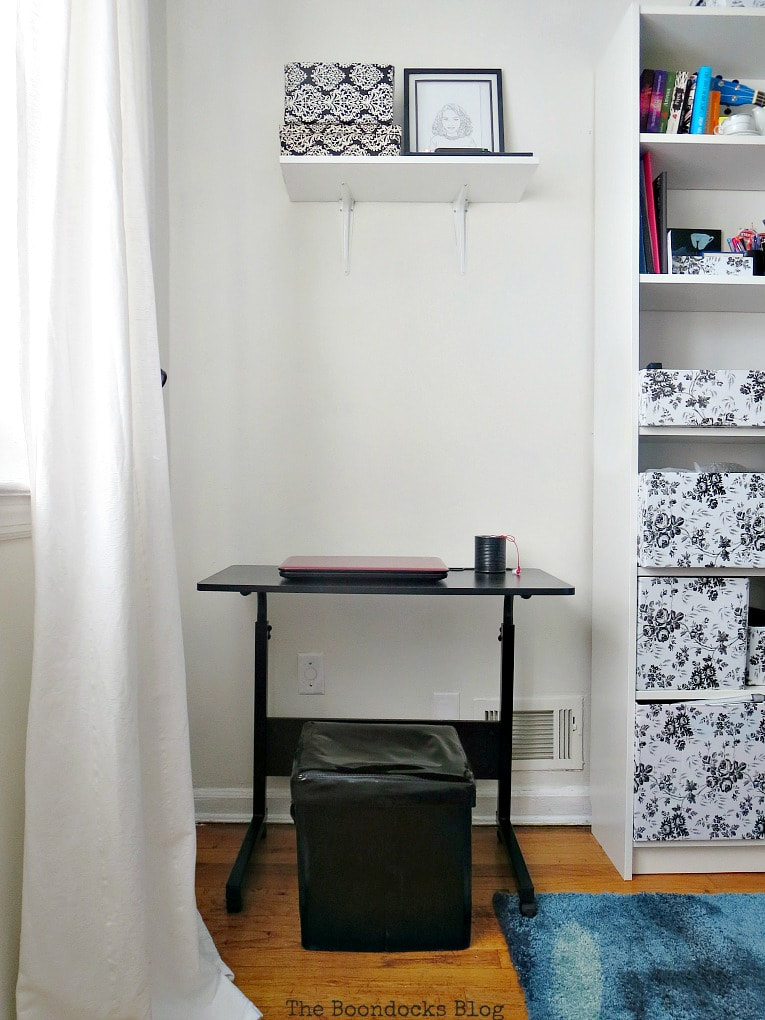 Looking towards the wall opposite the ombre wall, there is a big window which has a simple white curtain I got from Ikea. Again no color at all, everything is simple and tranquil.
​ 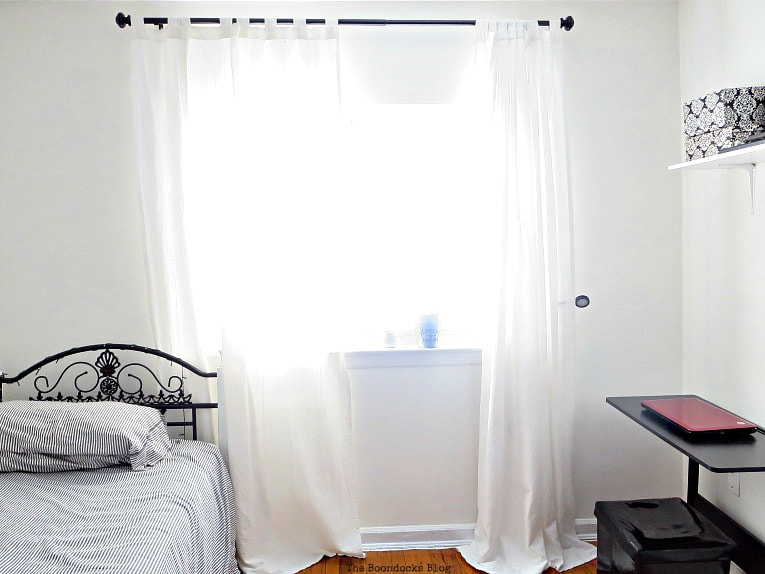 ​I just had to share this photo of my Cinderella dresser, notice how nice and shiny the top is?  And it is hard as a rock now that the paint has cured.  You know it is going to get a lot of abuse with all those beauty products!

By the way, I just found out this dresser is called a Campaign dresser.  I was looking through the internet and saw another one from Crate and Barrel priced for $699.  Not a bad upcycle!
​ 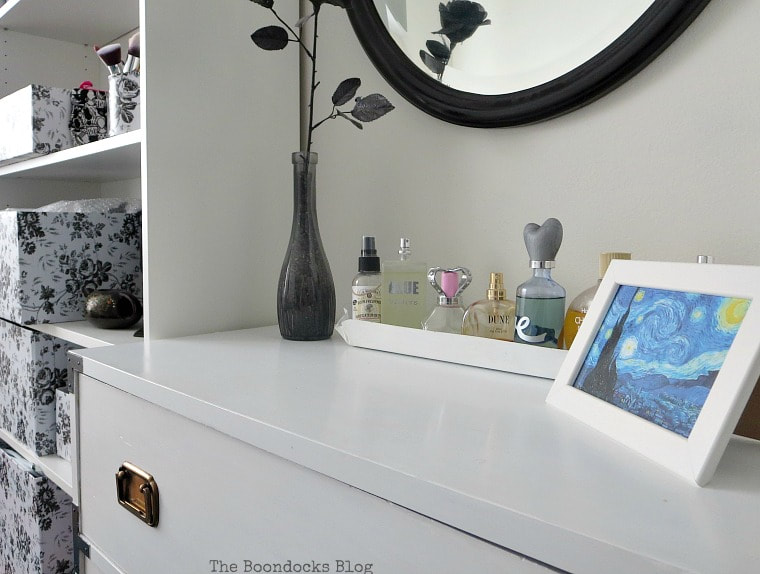 Let’s break it down.  For the Hemnes dresser, the rug and the two bookcases I paid about $480.  The beds, and all the rest I already had and just gave them a good makeover. Of course I may have spent a small fortune on the toile contact paper, hehe, but we won’t talk about that. I also paid for the paint for the walls (which I still have plenty left over) and that’s it!

I think I did pretty well considering that we had to start from scratch. 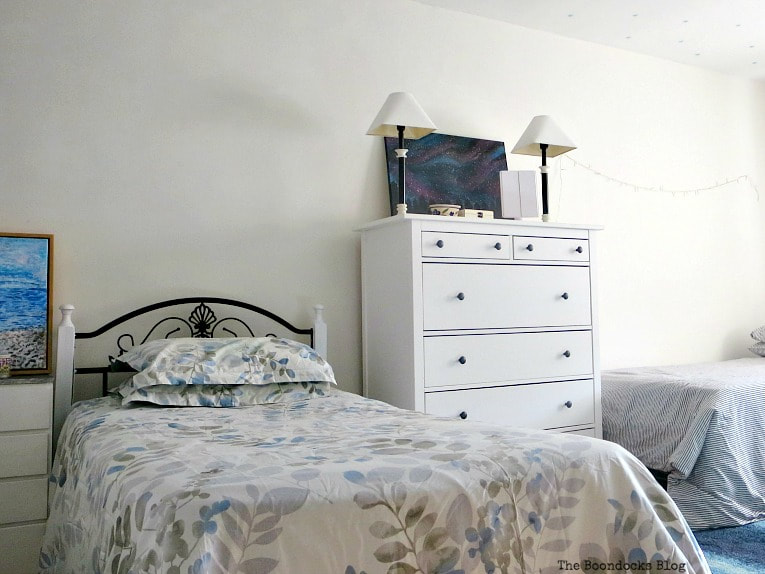 It is a room full of contradictions and yet it works perfectly to create the desired tranquil effect.  The lighting is everywhere – even a clip-on behind the curtain – and that really sets the mood.  A perfect sanctuary for my girls.
​ 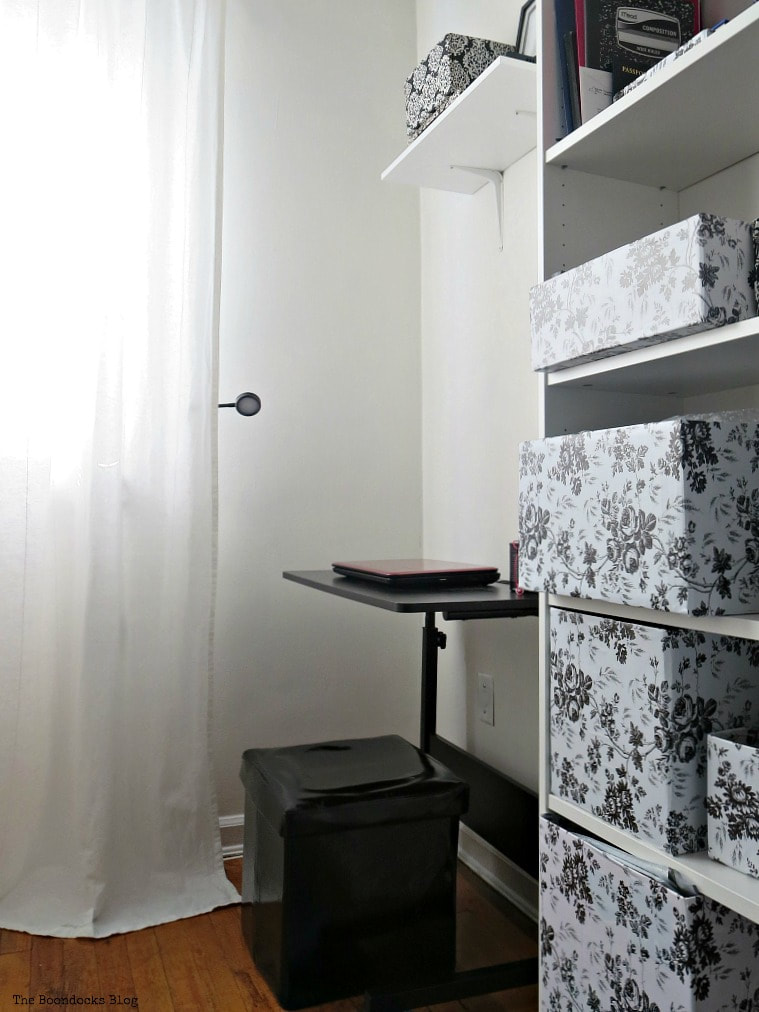 But the most important thing here is that my girls absolutely love their room.  It came out much better then what they expected. And it was all the result of teamwork and of this mama keeping an open mind and really paying attention to what they had to say.  And if we have a bit of color peeking through, well that’s okay, I promise not to freak out.  You can also see lots more ideas on how to get a fun bedroom here.

I hope you have enjoyed the tour of the mostly black and white bedroom and maybe you too have come away with some ideas.  Even if this is not your style it always helps to look at things from someone else’s point of view, even if it means painting a whole wall in ombre!

​I’ve included links to all the projects below. 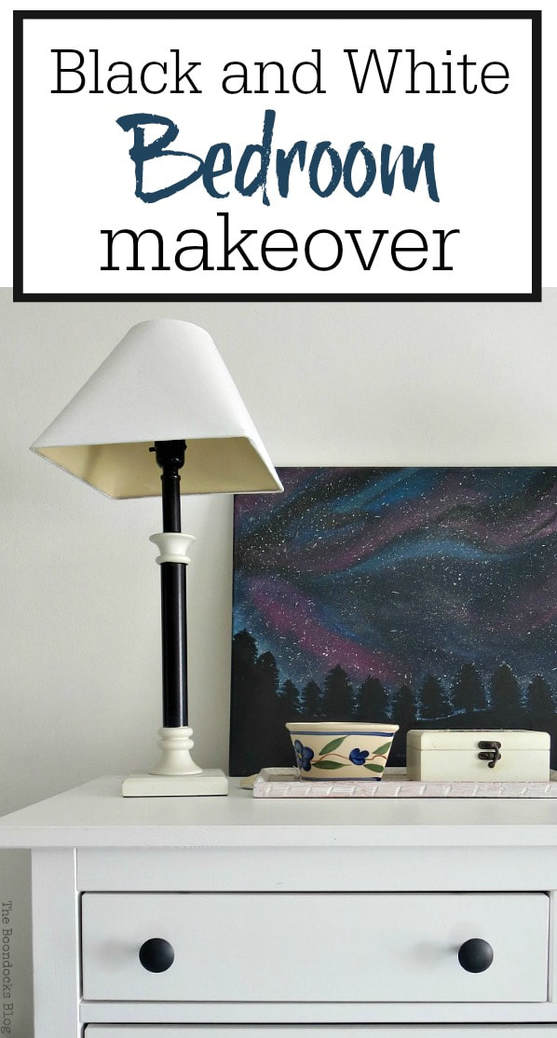 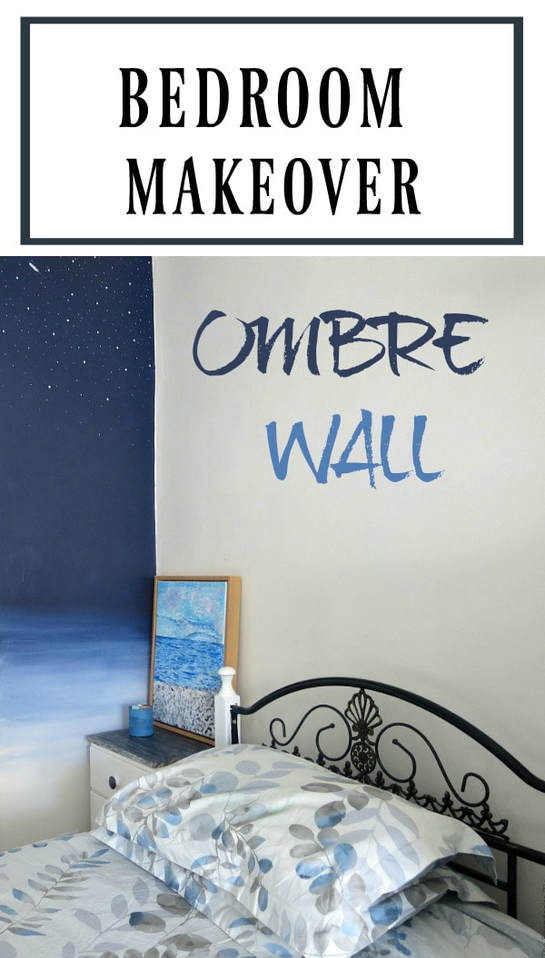 ​If you really like what you see subscribe to my blog and get my adventures in your mailbox. The form is on the sidebar and on top.  Your e-mail will never be shared with a third party.

​The Black and White Bedroom: 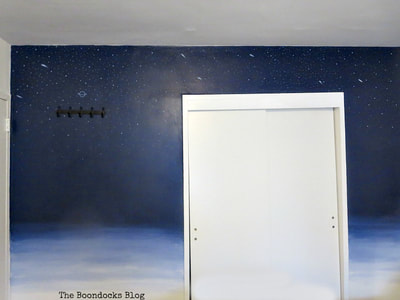 Decorating Plans and the Ombre Wall 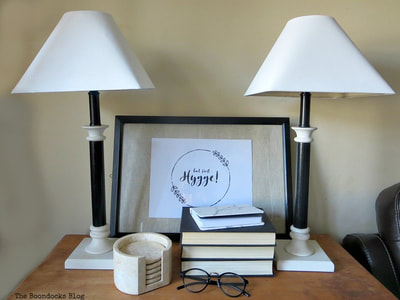 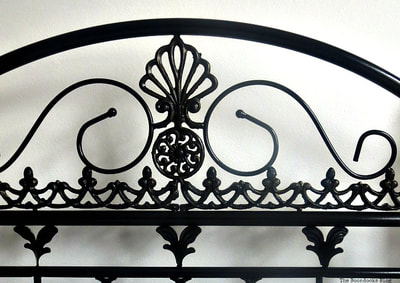 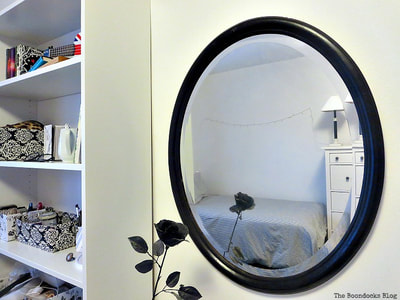 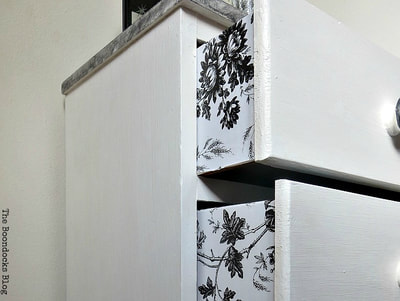 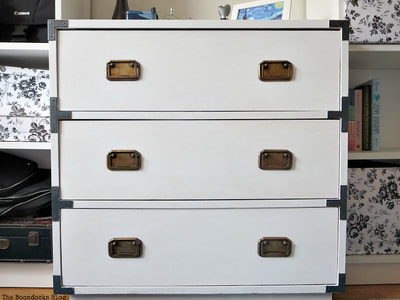 OMG Mary! What have you done here! It is a gorgeous space for both of your girls. Chic, girly and with a little drama! You did excellent work my friend! Hugs and kisses to you and your girls!

Beautiful. It's amazing how chic black and white can be in a room and the add touch of blue (my favorite color) added a little something extra. Props to you for making over such a beautiful room with a tight budget.

Thank you Patti. It is ever evolving but for now, it is my favorite room in the house. I'm curious to see what they do to it in the coming months.

The bedroom looks fabulous. It is so tranquil, which a bedroom should be. It is a great escape to do all the things young women are interested in.

The older girl loves to read her books in there. The younger one makes her videos and it was really important that she have a space that was a blank canvas for that. Sometimes I even go in and shoot some projects because the lighting in there is amazing.

Hi Mary, what a lovely uncluttered and simple room. Perfect for resting and relaxing. The ombre wall does add a nice touch of colour to the room and as for the stars? They're a touch I like, my two had something similar when they were small, but are too old and jaded (cool) now admit to liking them. Covering alll those boxes were worth it too, they look really neat on the shelves. xx

The stars was their idea and I guess they just want to express themselves. The truth is that in the winter it is tough here so having a space of their own was very important since they spend so many hours in there. It had to be just perfect for them.

Mary you have so many great ideas. I love the black and white floral storage boxes on the shelves. So pretty!

Those boxes are so practical and with the same covering it looks like a garden in there.